Along with models such as the Peugeot 2008 and the Peugeot 3008, the Peugeot 308 has made vast improvements in build quality, getting close to matching the VW Golf in our Driver Power owner satisfaction survey. It also comes packed with safety features that secured the model a five-star rating in the Euro NCAP crash tests.

The Peugeot 308 came in 63rd place in our 2020 Driver Power owner satisfaction survey, but Peugeot's overall eighth-place finish (out of 30 makers) was stronger than any other French brand. Although few owners seemed bowled over by the reliability of their cars, only 15.1% reported any faults in the first year of ownership. Fuel economy was better liked; Peugeot finished an impressive ninth overall in that regard. 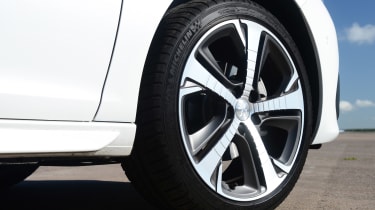 Safety features such as six airbags and seatbelt pre-tensioners mean the Peugeot should hold up well in the event of an accident, and the car was awarded the full five stars when it was crash-tested by Euro NCAP. The 308 also has a speed limiter and a seatbelt reminder buzzer that covers both the front and rear seats.

If you want to make the Peugeot 308 even safer, then it’s worthwhile getting the Driver Assistance pack. This is standard on Tech Edition cars and available on Allure and GT Line models for £400 and is standard on the GT. It includes active cruise control, which can keep a safe distance from the car in front before returning to a preset cruising speed when the road is clear. The pack also adds autonomous emergency braking (AEB), which can warn of an impending collision and, if no action is taken, brake the car to avoid or minimise the impact.

Safety technology has been given a further boost in the facelifted model, with the AEB system now functional at speeds up to 87mph, while the adaptive cruise control now works in slow-moving traffic. You can also choose lane-keeping assistance and traffic-sign recognition for the first time, as part of an optional safety pack.