Performance is stronger than ever and handling remains fantastic, but the Boxster has lost some of its character 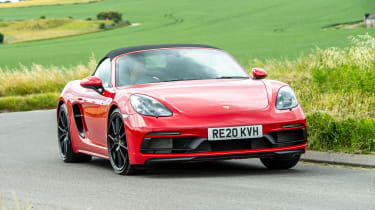 Those who mourned the passing of the Boxster's six-cylinder engines were placated to an extent by the power output of the four-cylinder replacement and the effect its reduced weight has on handling – the 718 Boxster is the most agile mid-engined Porsche roadster yet. Porsche has also seen fit to placate hardcore enthusiasts, giving the GTS a sensational 4.0-litre six-cylinder engine for a truly memorable driving experience.

Meanwhile, the Boxster's suspension has evolved, incorporating features from the specialist Porsche Cayman GT4 and is as finely honed as anybody could ask. Even the entry-level model responds immediately in a corner, rewarding you with tactile, communicative steering and deep reserves of grip, even if the surface is wet. The brakes are extremely powerful, too, and S models get the same setup as you’ll find on the bigger, faster Porsche 911 Carrera.

Enthusiasts insist that the Boxster's Cayman sister is a sportier steer, but the slight flex that comes from not having a fixed metal roof lends the Boxster a more forgiving, easygoing feel – and there's no substitute for that wind-in-your-hair feeling and the more immediate bark of the engine, especially in the GTS. The controls are pleasingly weighty, too, which helps you to feel more involved in the driving experience.

If you're tempted to sharpen the Boxster's reflexes further, you can specify a Sport pack on the S, which lowers and stiffens the suspension. Or you can choose Porsche Active Suspension Management (PASM) that gives you a choice of settings including an extremely firm Sports+ mode that's best suited to race tracks and is standard on the T and GTS models. We prefer the less extreme Sport setting, which is far more comfortable on Britain's broken road surfaces and does little to blunt the Boxster's handling responses.

The Boxster T comes with the PASM sport chassis, Sport Chrono package, torque vectoring differential, sports exhaust and active drivetrain mounts, all of which give it extra poise and dynamic appeal. If you're satisfied with the 296bhp from the standard engine and don't feel the need to move up to the 396bhp of the GTS model, then the T delivers essentially all the handling improvements for less money. 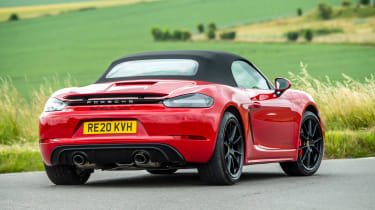 There are only two engines to choose from – both flat-four ‘boxer’ petrol engines that are either 2.0 or 2.5 litres in size. The entry-level model gets the 2.0-litre engine, which develops a healthy 296bhp – enough to propel the car from 0-62mph in as little as 4.7 seconds.

Just how fast your Boxster is depends partly on which gearbox you choose. Cars with the six-speed manual take 5.1 seconds to get from 0-62mph, while choosing the PDK twin-clutch automatic results in a time of 4.9 seconds. The quickest time of 4.7 seconds can only be achieved with the pricey Sport Chrono pack, which includes launch control, a system that ensures the perfect getaway.

The 0-62mph times prove that the latest Boxster is significantly faster than the old model, which is partly down to the overall increase in power but also because peak power is now generated over a much larger proportion of the rev range, meaning you don’t have to rev the car hard to get maximum performance.

It’s the same story with the Boxster S’s 2.5-litre engine. It produces 345bhp (again, spread across a much wider range of revs than before) and can get the car from 0-62mph in just 4.2 seconds when fitted with the PDK automatic gearbox and the Sport Chrono Pack. Its top speed of 177mph is slightly higher than the 170mph managed by the standard Boxster.

The GTS previously used the same 2.5-litre as the Boxster S, with power increased to 361bhp. In the biggest news story so far for this generation of Boxster, Porsche replaced this with a 4.0-litre, six-cylinder normally aspirated engine.

It's instantly the star of the show too, with a very different power delivery to the turbocharged four-cylinder engine. Peak pulling power doesn't arrive until 5,000rpm, and the engine keeps climbing keenly to its 7,500rpm limit, with a spine-tingling bellow from its standard sports exhaust. With 396bhp, the manual version gets from 0-62mph in 4.5 seconds and has a top speed of 182mph, but more impressive than the figures is the way it transforms the Boxster's character.

The six-speed manual is ideal if you really want to feel involved, with a slick yet weighty shift action that perfectly matches the Boxster's meaty pedals and steering. There's a clever rev-matching system available, which ensures smooth, fast progress by making small adjustments to engine speed when changing gear. You'll go even faster with the PDK twin-clutch gearbox, though – it can punch up and down through the gears with unrelenting ferocity if you should so desire, but is equally comfortable slurring its way through the gears either around town or on a motorway cruise. It can get from 0-62mph in a scarcely believable 3.8 seconds, thanks in part to 30Nm extra pulling power from the engine.

There’s no doubting that the latest Boxster is significantly faster than its predecessors, and its extra performance is easier than ever to use. The GTS even has enough power to overwhelm the grip of the rear tyres, making it possible for skilled drivers to provoke small, controllable slides on track. And while the original six-cylinder engine sang beautifully, the offbeat, rally-car growl of the 718 has its own distinct appeal.