For a two-seat sportscar, the Porsche 718 Boxster is reasonably practical 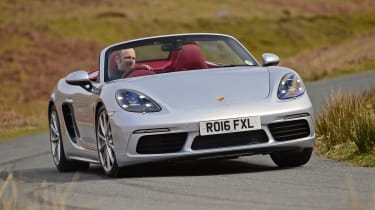 In the same way that Boxster buyers are unlikely to prioritise running costs, neither will they be particularly concerned about practicality. Yet the Boxster impresses in this department regardless thanks to its two boots and the interior storage on offer. It takes just nine seconds to lower the roof and it can be folded or put back up again at speeds of up to 30mph – a handy feature if it starts to rain. It doesn’t impinge on boot space when it’s folded, either. 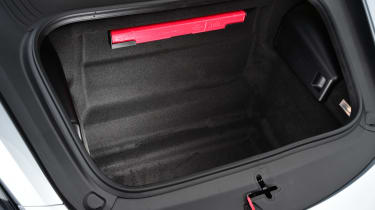 There are a few handy storage spaces dotted around the Boxster’s interior, including a decent-sized cubby between the seats as well as Porsche’s trademark pop-out cup holders. The glovebox is a good size, too, but the big disappointment in here is the size of the door trays, which are both narrow and shallow, severely limiting their usability.

There are two boots in the 718 Boxster – one deep, 150-litre space at the front and one 130-litre load area at the back behind the engine. This should prove enough for a few squashy bags to facilitate a weekend away, but no more than that. There’s also some storage space behind the seats – between them and the rear bulkhead – with a hook on the back of the seats to carry items like clothes on a coat hanger.

Towing is not an option with the Boxster. The Porsche Macan and the Porsche Cayenne SUVs are far superior if you want a tow car with a Porsche badge.