Porsche enjoys an excellent reputation for quality, and safety seems assured in the Cayenne

Porsche wholeheartedly deserves its reputation as a premium carmaker – its cars are built to exacting standards and use top-class materials inside and out. A real reputation for quality has helped residual values to remain high and owners tend to be confident in their cars. 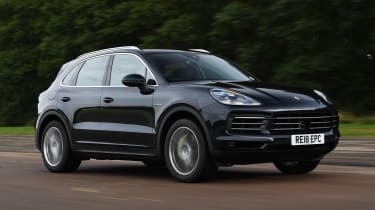 Porsche cars have a reputation for very thorough engineering and their reliability isn't really in question – although it's unfair to expect any new car to be entirely immune to niggles.

Unfortunately, too few Porsche owners participated in our2020 Driver Power owner satisfaction survey for us to accurately gauge how customers regard their Cayennes, but it's rare to hear of a dissatisfied Porsche owner. There is a caveat, though, which is that any Cayenne is a highly complex vehicle that should be looked after correctly to remain at its best. If maintained according to Porsche schedules, a Cayenne should be a generally trouble-free proposition.

Sharing its mechanical basis with the Audi Q8 and third-generation Volkswagen Touareg means the latest Cayenne can offer the same excellent crash-avoidance technology as its stablemates. As a result, autonomous emergency braking, active cruise control and lane-keeping assistance systems are all available.

The previous generations of the Cayenne SUV were never crash tested by Euro NCAP due to the model’s relative exclusivity, but the latest version has undergone rigorous testing earning a full five star rating. The standout of which is an impressive 95% score for adult occupant crash protection.