The previous generation of Cayenne was typically assessed as having excellent handling and performance characteristics, although the caveat 'for an SUV' always applied. This time, though, the gap between the Cayenne and a sports saloon has narrowed markedly.

Porsche's engineers spent countless hours honing the chassis shared with the Audi Q8 and Bentley Bentayga to feel at home under a Porsche – and their efforts have paid off. As well as setup changes, a lot of sophisticated technology has been employed to optimise its behaviour on and off the road. 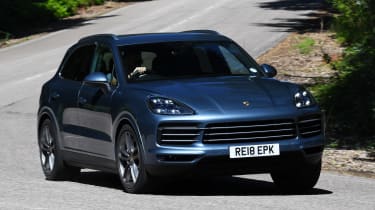 Key to this is a '4D chassis control' system that constantly monitors dozens of parameters, controlling an air-suspension system to ensure the car is best set up to tackle the prevailing road or terrain conditions. Off-road forays are taken care of by gravel, mud, sand and rock driving modes, with different ride-height options for each.

The four on-road driving modes are more likely to be exploited frequently, and optional electrically operated anti-roll bars and rear-wheel steering allow for an even more impressive repertoire of talents. Even without these, the Cayenne far surpasses the handling and roadholding standards of virtually all its rivals. Body lean is virtually non-existent and grip is formidable, although it can be coaxed into a controlled slide in the hands of an experienced driver.

The brakes are also very positive, which is essential as the Cayenne gathers momentum very rapidly and weighs over two tonnes. A carbon-ceramic brake setup can be chosen – it's even more effective but extremely expensive to buy and maintain. 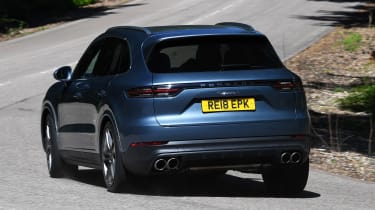 The Porsche Cayenne engine line-up is quite broad and every one of them can rightly be regarded as offering a high level of performance.

The entry-level Cayenne uses a 3.0-litre turbocharged V6 that produces 335bhp, while the Cayenne S engine is slightly smaller at 2.9 litres, but gains an extra turbocharger for 434bhp. The latter is very responsive, with an appealing growl from the exhaust that – thankfully – isn't too intrusive on the motorway. Going from 0-62mph takes 5.2 seconds with this engine.

Aimed at driving enthusiasts, the Cayenne GTS has lowered suspension, adaptive dampers and torque vectoring to give it the most precise handling. Power is provided by a 454bhp 4.0-litre twin-turbocharged V8 petrol engine.

The Cayenne Turbo is even more highly tuned, with a massive 542bhp getting it from 0-62mph in just 4.1 seconds. The range doesn't end there because the Turbo S E-Hybrid adds a 134bhp electric motor for a total output of 671bhp, cutting the 0-62mph time to 3.8 seconds. All use a slick, responsive, eight-speed automatic gearbox and an 'active' four-wheel-drive system.