"The Porsche Cayenne S E-Hybrid is one of the best hybrid SUVs to drive but it's not cheap to run and the interior is starting to show its age." 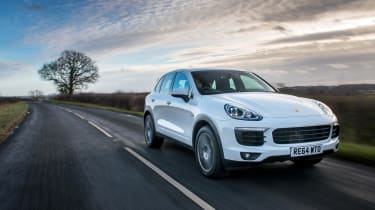 You wouldn’t have to travel back too many years to live in a world where a fast, hybrid SUV that was fun to drive was not a type of car you could buy.

Demand for SUVs and crossovers combined with the pressure for better fuel economy has, however, spawned cars such as the Porsche Cayenne S E-Hybrid. It serves up the vaunted high driving position and practicality of an SUV, along with the performance you’d expect from a Porsche. The hybrid system means official economy is higher than a conventionally powered Cayenne and enables you to drive on pure electricity in slow traffic or for short distances.

The Cayenne is one of the very best large SUVs in terms of handling and straight-line speed. While the BMW X5 and Land Rover Sport are more refined, they can’t match how close the Cayenne comes to feeling like a sports car.

If driving thrills, a spacious interior, a big boot and a luxurious finish are your top priorities for an SUV, along with some ‘green’ credentials, it’s hard to look past the Cayenne S E-Hybrid. The only major downside for potential owners is how much it costs.

The Porsche Cayenne S E-Hybrid claims official economy of 83.1mpg and CO2 emissions of between 75 and 79g/km depending on the size of the alloy wheels you choose (bigger wheels results in slightly higher emissions). The car will cost £130 to tax each year, plus a £310 surcharge from years two to six of its life, because it costs more than £40,000 to buy.

The hybrid Cayenne is capable of travelling around 22 miles in electric-only mode, which helps it achieve the impressive official economy figure. Obviously if you only use the car for short trips around town and you have the opportunity to charge it between trips, it’ll be very cheap to run. However, if you want to exploit more of the car’s power, calling on the petrol engine, too, then economy will take a big hit – expect nearer 20mpg than 80mpg if you’re driving enthusiastically.

If the starting price of the car isn’t too much of an obstacle, the hybrid Cayenne actually makes a relatively appealing company car because its low emissions mean it gets a low Benefit-in-Kind (BiK) rating of 13%-17%.

Porsche offers a three-year/unlimited-mileage warranty on all its new cars. The S E-Hybrid is rated in group 49 for insurance, meaning your policy will be expensive. The car will need its first service at two years/20,000 miles, before a major service after four years/40,000 miles. Expect a service to cost around £500.

One of the best large SUVs to drive on the market

Hybrids don’t have a great reputation when it comes to performance, because generally they’re designed to be economical rather than sporty. They’re also hindered by the extra weight of their batteries. The Cayenne S E-Hybrid remains true to the Porsche brand, however, with a supercharged 3.0-litre V6 petrol engine and an electric motor combining to produce 410bhp. A 0-62mph time of 5.9 seconds is very impressive when you consider the car weighs 2.5 tons.

While the extra bulk of the batteries doesn’t slow the car down too much in a straight line, it’s more noticeable when you take corners at speed. The hybrid is 270kg heavier than the Cayenne S, which has the hybrid’s V6 petrol engine without the electric motor, and the added weight means the suspension struggles when you attempt to change direction quickly.

Once you’ve learned how the car behaves, it’s easy to adjust your driving style to suite the hybrid Cayenne’s strengths; smooth, fluid steering inputs lead to precise cornering and the V6 engine sounds good as the revs rise. What’s more, the electric motor fills in with extra power when the V6 isn’t at peak power, which makes the power delivery feel even smoother. The car’s automatic eight-speed Tiptronic S gearbox works well and can be controlled by paddles behind the steering wheel when you want to change gears yourself.

In pure electric mode, the car is hushed and comfortable but slow. This shouldn’t matter too much anyway, as the intention is owners will only use the mode when they’re stuck in traffic or driving around town.

If performance is your top priority, you’d be better off with one of the conventionally powered Cayenne models, but as hybrid SUVs go, there are few out there as fun to drive as the Cayenne S E-Hybrid.

The Cayenne is a big and practical SUV, but the interior is still laid out with the driver in mind; the dashboard and centre console wrap around the driver’s seat to give a sportier feel. Partial leather seats come as standard and are both comfortable and supportive, holding you in place during cornering and proving relaxing on long motorway journeys. They have eight-way adjustability, but if you want more, you can upgrade to 14-way and 18-way adjustment as options.

Build quality is excellent, as is the finish of the interior. The only gripe we have is the amount of buttons around the dashboard - compared to newer cars, the interior is starting to look a little dated and cluttered, even if the quality is still good. As you’d expect from a car costing over £60,000, the materials used are nice to touch and look at.

In full electric mode, the car is very quiet. The only thing you’re likely to hear is road noise from the tyres, particularly if you go for the bigger alloy wheels (18-inch alloys come as standard, but you have the option to go up to 21 inches).

At motorway speeds, the car isn’t as refined as a BMW X5 or Range Rover Sport, so if comfort is of more importance to you than performance, you should look at the Cayenne’s rivals. If you’re set on the Cayenne, it’s well worth upgrading to the air suspension, as it noticeably improves ride quality.

Porsche introduced a Platinum Edition of the S E-Hybrid at the start of 2017, which is essentially a styling pack including extras such as 21-inch alloy wheels, wider wheelarches, tinted windows, xenon headlights, heated electric leather sport seats and a Bose surround-sound stereo. If you’d spec most of that kit as options on the standard hybrid, the Platinum Edition will save you money.

The Cayenne is a large SUV, so practicality is one area in which it excels. The latest version is longer than the previous one, meaning legroom for rear-seat passengers is excellent. Headroom is good in the back, too. The rear seats slide forwards and backwards so you can create more legroom for passengers in the back or more boot space, depending on what’s needed. Storage throughout the interior is plentiful.

Unlike some hybrids, the battery for the Cayenne’s electric motor doesn’t eat into boot space, so capacity remains at the 670 litres available in the conventionally powered models. This is one of the bigger boots in the class, with the Range Rover Sport the only big rival to beat it, with 784 litres. With the rear seats folded, the Cayenne offers 1,728 litres of space. The only compromise is the compartment under the boot floor, which is full of battery in the hybrid rather than more storage space. A powered tailgate comes as standard.

Neither the Cayenne as a model nor Porsche as a manufacturer appeared in the 2017 Driver Power Survey, but in 2016 Porsche came seventh out of 32 carmakers, ahead of BMW, Mercedes and Land Rover. The brand has a reputation for excellent build quality and performance and we don’t see any reason for that to change.

The Cayenne doesn’t sell in sufficient numbers to have been crash-tested by Euro NCAP, but it has impressive safety credentials nonetheless. Based on the Volkswagen Touareg, which scored the full five stars when it was tested, the Cayenne comes with a range of safety systems to help prevent crashes and protect occupants should the worst happen. The grip available also makes it a safer car than many in poor weather conditions.

The Cayenne is undoubtedly one of the more expensive cars in its class and this is compounded by the options list, which is extensive. Unless you want the car in black or white, paint will cost over £700; some of the optional alloy wheels cost almost £4,000, as do upgrades to the interior materials; many of the design packs cost £3,000.

The option we’d consider most essential is the air suspension system with Porsche Active Suspension Management (PASM). It costs just under £1,400, but really improves ride quality and will make a bigger difference to your experience of driving the car on a daily basis than some of the expensive but cosmetic optional extras. 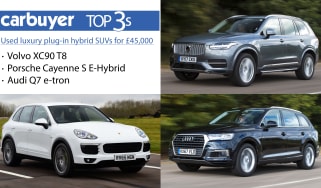