“The Porsche Cayenne blends the attributes of a 4x4 with the performance and handling of a sports car, but those traits don’t come cheap”

When it first launched, the Porsche Cayenne saw loyal brand enthusiasts up in arms over the arrival of a beefy SUV wearing the famous sports car marque’s badge. In the years since, the Cayenne has gone on to top Porsche sales charts month after month, attracting new customers to the brand thanks to its rarely seen mixture of pace and practicality. It has only now been overtaken by the smaller and more affordable Porsche Macan SUV. 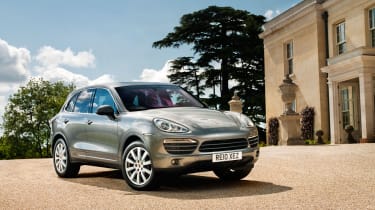 There have been plenty of 4x4s billed as high-performance models, simply because a potent engine has provided faster acceleration, but the Cayenne is much more of a thoroughbred. The Porsche is more than capable of tackling a challenging road with the ability of a much smaller model, while top versions can get from 0-62mph in under five seconds and reach a top speed of 176mph. Today, the Cayenne has a surprising number of rivals, with the Range Rover Sport, BMW X6 and Mercedes GLE all boasting their own desirable features, but none can match the Cayenne for driver involvement.

Practicality isn’t compromised either; there’s still a large boot and rear seats that can slide to adjust legroom and luggage space, plus the Cayenne even has a 3,500kg towing limit, regardless of which version you choose.

Unfortunately, such a strong list of attributes and a Porsche badge add up to a steep price, even before you start adding expensive options. Most buyers would also be better sticking with the diesel or petrol hybrid engines, because the petrol models are seriously expensive to run and don’t make it far between petrol stops on those continental drives. 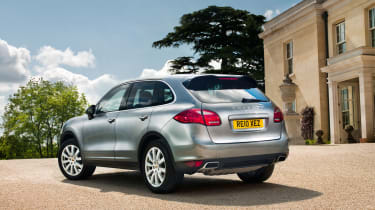 There’s no shortage of choice, with the entry-level Cayenne and Cayenne Diesel, the popular Cayenne S and S Diesel, aggressive Cayenne GTS, hugely fast Turbo and Turbo S and the S E-Hybrid version. If you're considering buying a Cayenne, we'd recommend the S Diesel, as it gives you great performance with better fuel economy than the petrol models.