The Porsche Cayenne is a large SUV, so it offers good practicality to go with its impressive performance. The boot is a decent size and there’s plenty of room for rear passengers thanks to back seats that can slide backwards and forwards to create more legroom. The Cayenne isn’t available with a third row of seats in order to accommodate seven people like some cars in its class, but otherwise it competes well with all its rivals on the practicality front.

A world away from the two-seat Porsche 718 Boxster, the Cayenne is a full-size, five-seat SUV with plenty of headroom and legroom for front and rear passengers. In fact, the latest Cayenne is longer, which particularly benefits passengers in the back. The rear seats can slide forwards and backwards to adjust the amount of boot space and legroom, while also reclining to improve comfort. Unlike some rivals, however, there's no optional third row of seats for kids, so if you've got a big family, you'll have to look elsewhere. 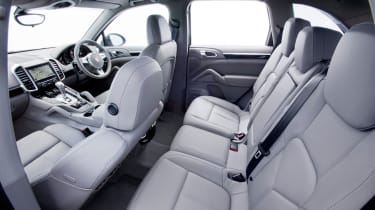 The Cayenne also boasts a large glovebox and door bins that are able to swallow a big bottle of water. Cup-holders are found in the centre console and rear seat rest. The boot has lashing points and we'd recommend the optional cargo nets to stop items rolling around in the boot.

The Porsche Cayenne has 670 litres of luggage room behind the rear seats, beating the BMW X6 (580 litres), Mercedes GLE Coupe (650 litres) and Infiniti QX70 (410 litres), but lagging behind the Range Rover Sport's 784 litres. Still, it's a huge boot, with plenty of room for a family's holiday luggage and the option of folding down the rear seats to free up a total of 1,728 litres. There’s a wide boot opening and smooth loading lip, but sadly the seats don't fold down completely flat, so large items can get caught as you slide them in. An electrically powered tailgate is standard. 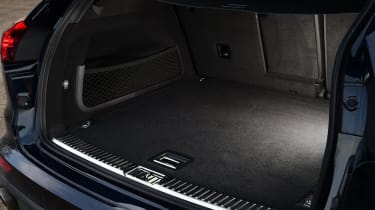 In the S E-Hybrid model, the battery pack is neatly fitted into the compartment underneath the boot, so it doesn't impinge too much on luggage space, although it does of course mean there's no underfloor storage in this version.

The amount of horsepower on offer across the entire Cayenne range means every model in the line-up is capable of towing a maximum braked weight of 3,500kg, which only the most powerful Mercedes GLE models and non-hybrid Range Rover Sport can match.