Even the slowest Porsche Cayenne accelerates from 0-62mph in 7.3 seconds – a respectable figure for a quick hatchback, let alone a massive SUV. This entry-level Diesel produces 258bhp, while the Diesel S produces a massive 380bhp and can reach 62mph from rest in just 5.4 seconds. Both diesels move the big Cayenne very swiftly and have plenty of shove at almost any speed – there's no need to work the engine hard. 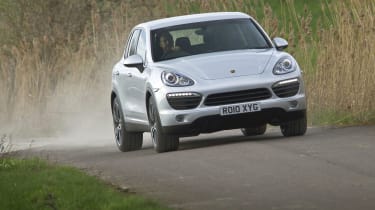 The S E-Hybrid has a power output of 410bhp but it's also heavier than the diesels, so its 0-62mph time is a slightly slower 5.9 seconds. In full electric mode, the car is smooth but slow, so the extra power from the supercharged V6 engine is welcome and provides plenty of performance in tandem with the electric motor.

If running costs are of no concern, the Cayenne S has a 414bhp V6 petrol engine and does 0-62mph in 5.5 seconds, while the Turbo model has a 4.8-litre V8 and takes a second less to do the same. Its top speed of 173mph makes it one of the fastest SUVs in the world – though not quite as quick as the mind-bogglingly fast Turbo S, which is the best Cayenne for those who crave ultimate performance. 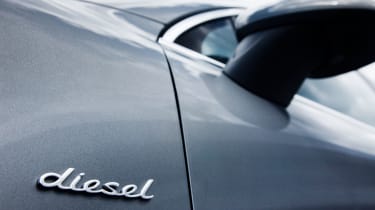 However, we think the Cayenne GTS, which slots into the range just below the Turbos, is more fun to drive. It has a 434bhp 3.6-litre V6 twin turbo petrol engine and will do 0-62mph in 5.2 seconds. The addition of a sports exhaust makes it sound quite exciting – although refinement suffers slightly, too.

Sharp steering, four-wheel drive and almost no body lean all make the Cayenne fun to drive, and it feels more like a rapid sports saloon or estate car than a two-tonne SUV. While the Cayenne can seem very wide on British country lanes, it's in its element along sweeping A-roads and also manages comfortable motorway driving. Refinement at cruising speeds is particularly impressive in the hybrid model, as the petrol engine will usually cut out to let the electric motor maintain the car's speed on motorways for almost silent running.

Like all Porsches, the Cayenne offers a vast array of optional extras to improve how it drives. The most important of these is the Porsche Active Suspension Management (PASM) adaptive air suspension. This comes in handy, not only for reducing the amount of body lean from acceptable to almost non-existent, but also for making the car easier to get into. When parked, the car can squat up to 52mm closer to the ground to make climbing aboard or loading the boot simpler.

Once you're underway, the Cayenne offers a low ride-height setting for better high-speed aerodynamics, as well as two different high-riding settings if you plan to go off-road. The stiffer settings are too harsh for use on UK roads, but the comfort mode is a very well judged compromise.

If you take your Cayenne off-road, you're likely to be astounded at just how competent it is. Though its wading depth isn't as deep as a Range Rover's, it can handle extremely slippery or rocky terrain, and the hill-descent mode used to control scrambles down slopes is particularly intuitive. When you've sampled the Cayenne's off-piste prowess, the fact that it drives like a sports coupe on the road becomes even more impressive.