A car as large and fast as the Porsche Cayenne was never going to be a particularly economical model, and the petrol versions are predictably very expensive to run. The hybrid and diesel-engined versions are more reasonable, but it’s all relative; the Cayenne is never going to be exceptionally frugal unless you’re in a position to drive the hybrid model in electric mode most of the time.

At the end of the day, the Cayenne is a Porsche, which means the overall cost of ownership is going to be high. Insurance, servicing and parts aren’t cheap, but you do at least know that the car’s upmarket image and desirability mean it will hold on to more of its value than many rivals when you come to sell or trade it in.

You’d be forgiven for thinking that the Porsche Cayenne costs a small fortune to keep running, but as long as you avoid the thirsty petrol engines, it's actually quite reasonable. In fact, the Porsche Cayenne S E-Hybrid returns a claimed 83.1mpg and emits just 75-79g/km of CO2, meaning it gets a low Benefit-in-Kind (BiK) rating of between 13 and 17%. 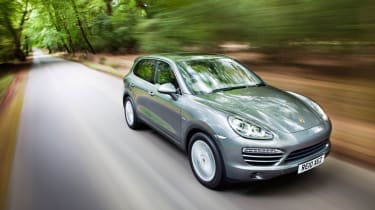 The S E-Hybrid can achieve these figures because its battery pack allows it to travel for up to 22 miles using only electric power, but it needs topping-up from a household electrical socket or a public EV charging point fairly regularly if you want to avoid using the petrol engine. If you drive the car on electric power alone for short journeys, you may never have to visit a petrol station again, but switch it into Sport mode to have some fun on twisty roads and that 83.1mpg figure will quickly plummet towards the 20mpg mark.

Most UK buyers will choose the standard Cayenne Diesel or more powerful Cayenne Diesel S versions, which return 42.8mpg and 35.3mpg respectively, with corresponding CO2 emissions of 173g/km and 209g/km. For these engines, company car drivers will be liable for a BiK rate of 36 or 37%.

The petrol Cayenne S has a sports-car-like thirst for fuel, with figures of 29.7mpg and 223g/km, while the Cayenne Turbo is the true SUV alternative to a supercar and manages just 25.2mpg and emits 261g/km of CO2, placing it in the highest 37% BiK bracket.

A combination of the Cayenne’s performance and the image of a brand like Porsche make this an expensive car to insure. The basic petrol model is in group 44, while the entry-level diesel is in group 45. The S E-Hybrid model is in group 49 and almost every other version (Including the GTS and Turbo) sits in the top group 50.

The Porsche Cayenne comes with a two-year warranty that covers the car for unlimited mileage during that time. After that, you can choose to extend the cover at extra cost. It works out at just over £1,000 a year to do so.