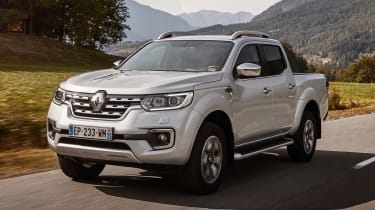 The Renault Alaskan is the French brand’s first model in the rapidly growing class of one-tonne pickup trucks, which get their name from the amount of weight they can carry in their loading beds.

It’s a market that accounts for around 4.5 millions sales a year worldwide but with just 3% of these finding homes in Europe, there’s plenty of potential growth. Customers certainly have plenty of choice because the Alaskan faces well-known competitors such as the Toyota Hilux, Mitsubishi L200, Ford Ranger and Volkswagen Amarok.

Despite being Renault’s first pickup, the Alaskan isn’t all-new from the ground up because it’s based on the same underpinnings as the Nissan Navara and Mercedes X-Class, in the same way the Fiat Fullback is based on the Mitsubishi L200.

We drove the car in Europe before it went on sale in certain countries on the continent but Renault subsequently postponed the launch of the Alaskan in the UK, so it remains to be seen if/when it will arrive here.

The Alaskan is easy to spot, at least from the front, where it’s slatted grille is home to an oversized Renault badge. There’s also neat headlights and fog lights with Renault’s signature C-shaped embellishment, echoed by its LED daytime running lights. While full specifications are still being ironed out, it’s likely entry-level models will get 16-inch alloy wheels, a five-inch touchscreen infotainment system and a reversing camera. Meanwhile, top trims should have DAB radio, leather seats and a 360-degree camera view.

Unlike almost every SUV, the steering wheel only adjusts for height and not reach, but passenger space is reasonable and the rear seats are more spacious and comfortable than most other pickups. The loading bed can carry up to 1,059kg and can be covered with a detachable roof if you need to keep your cargo more secure or out of the elements. 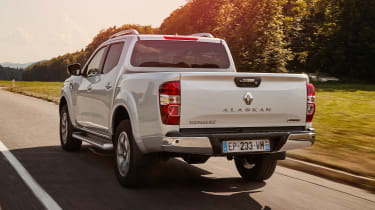 Two versions of the same 2.3-litre turbodiesel will be offered, with either 158 or 187bhp, and come paired with a six-speed manual or a seven-speed automatic gearbox. Every Alaskan can tow a braked trailer of up to 3,500kg and comes with selectable four-wheel drive.

Performance is brisk enough, but the automatic version can be slow to change gear, so doesn’t feel quite as good to drive as the manual. Like most pickups, vague steering and a fair bit of body lean means you have to stay alert on narrow roads, but the Alaskan is generally quite good to drive.

While the Renault Alaskan hasn’t been crash-tested by Euro NCAP yet, the Nissan Navara scored four stars in 2015 - a respectable result for a pickup, with 79% for adult occupant protection. Still, if safety is your main concern, an SUV like the Renault Koleos will offer more advanced safety technology.

It might be big, but the Alaskan’s running costs can be affordable

Despite its size and boxy dimensions, the Renault Alaskan’s economy figures should be fairly respectable. Fitted with the 158bhp engine and manual gearbox, the Double Cab should return around 45mpg, matching the Fiat Fullback and beating the 40mpg claimed by the Toyota Hilux.

Upgrading to the 187bhp engine yields exactly the same economy, unless you opt for the automatic, which drops the figure to 40mpg and increases CO2 emissions from 167 to 183g/km. 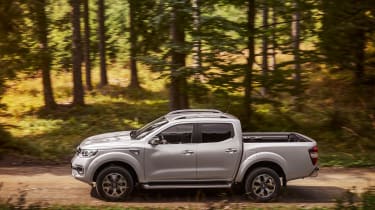 As the Alaskan is classed as a light goods vehicle rather than a car, it will incur a flat-rate road tax bill of £240 a year. This is £100 more than a similar SUV, but if you’re a business driver, the Government’s fixed Benefit-in-Kind (BiK) company-car tax of £3,230 for pickups is likely to save you money. If you pay 20% tax that will work out at just over £50 a month, while those in the 40% tax band will pay around £100 a month.

With so much shared with the Nissan Navara, servicing the Alaskan should be straightforward and it will have been built to be just as rugged and hard-wearing. The Alaskan is only covered by a three-year/60,000 miles warranty, which puts it behind the five-year/100,000-mile warranties supplied with the Navara and Toyota Hilux.

Like the Navara, the Alaskan has either a 2.3-litre diesel with one turbocharger and 158bhp or with twin-turbochargers and 187bhp, so it doesn’t lack power. It’s still a heavy vehicle though, so even the top version takes just over 10 seconds to get from 0-62mph, while the entry-level engine adds another couple of seconds to that.

On-paper times for the manual and automatic gearboxes look similar, but we found that the automatic feels more sluggish, responding slower to the accelerator pedal and hanging on to gears for too long. While this makes it feel slower and less confidence-inspiring for overtaking slower traffic, it’s also fairly relaxing at a steadier pace and around town. 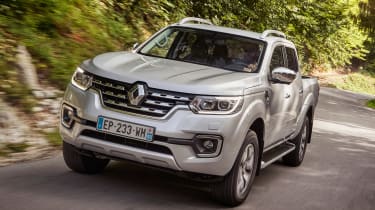 Pickup trucks have often been hamstrung by basic leaf-spring rear suspension, which is designed to carry heavy loads but offers poor ride comfort and a bouncy ride. The Double Cab version gets a much more sophisticated five-link suspension setup and the Alaskan is much more comfortable as a result, if not quite up to SUV standards.

It’s a big improvement, but the Alaskan is still a pickup, so the steering is quite vague and there’s some body lean. These traits become most apparent on a narrow, twisty road, where you’ll need to concentrate to keep the Alaskan exactly on your chosen path. The same is true of other pickups and the Alaskan is surprisingly easy to drive in towns and cities, with a relatively sharp 12.4-metre turning circle for negotiating tight streets. 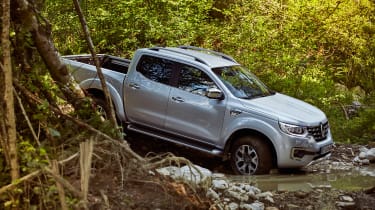 In normal use the Alaskan is rear-wheel drive, but it’s possible to switch to four-wheel drive at speeds of up to 62mph. There’s also a low-range gearbox for seriously tricky conditions, but this can only be chosen while the Alaskan is in neutral. Pickups are arguably more likely to be driven off-road than most SUVs and the Renault acquits itself well, making steady progress even in muddy conditions. If you come up against a steep drop, there’s also Hill Descent Control to ease the Alaskan safely to the bottom.

The Alaskan is comfortable and well-equipped for a pickup

While the more sophisticated suspension of the Double Cab Alaskan makes the ride quality much better with or without cargo, it still isn’t as comfortable or refined as an SUV. This is partly down to its shape, because at speeds of around 65mph and above, wind noise becomes quite noticeable. It’s also because the Alaskan’s commercial roots mean there’s less sound deadening and mechanical parts like the gearbox feel more industrial and less polished.

Trim levels for the UK haven’t been confirmed yet, but standard Alaskan’s are likely to get smaller 16-inch alloy wheels, a five-inch touchscreen for the dashboard and a reversing camera to make parking much easier. Heading up the range will add features like DAB radio, 18-inch alloy wheels, a five-inch display between the instruments, leather upholstery and a 360-degree camera view to further assist with parking. 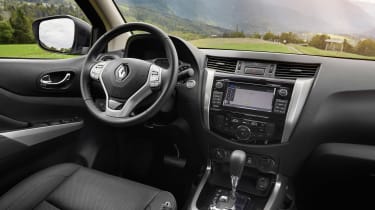 It’s disappointing that the steering only adjusts for height and not reach, but the rest of the passenger space is more practical, with good head and legroom and 20 storage cubbies placed around the interior. The rear seats deserve praise, because as well as being reasonably spacious, the seatbacks are slightly reclined, unlike some pickups with very upright seats attached to the rear bulkhead. A transmission tunnel does mean the middle passenger will have to try hard to find room for their feet. 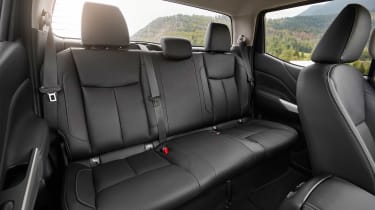 While pickups like the Alaskan can look very practical, if you’re making the swap from an estate car or SUV the reality can be a disappointment. For a start, the loading area might be huge, but it has a bare metal floor and is open to the elements. Any items, like shopping or a few rucksacks, are likely to slide around all over the place and there’s no security against theft. For this reason it can be better to fit a locking hard-top, even if you’ll still need to secure smaller items to stop them moving around and getting damaged. 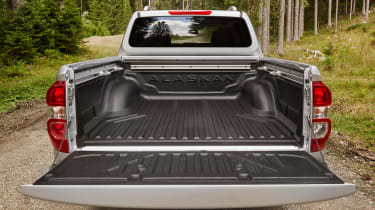 If you plan on using your pickup for work, the loading bed can carry a huge amount of cargo, including a Euro pallet and a payload of up to 1,059kg. There are sturdy tether points and a ‘C-channel’ system that uses runners along the side of the bed to make it easier to secure items exactly where needed.

It should be built tough and has plenty of safety kit

While it’s far too early to know for definite, we’d expect the Renault Alaskan to stand up to years of hard wear. Not only is it designed to be a rugged workhorse, but the Nissan Navara it’s based on has built up a loyal following for its sturdiness. Negotiating a muddy building site, hauling tools and towing heavy loads should all be in a day’s work.

The Alaskan is built using tried-and-tested construction methods with parts designed for commercial use, so its mechanical components should be very tough and dependable. Its 2.3-litre engine has been widely used in pickups and commercial vehicles all over the world. However, neither Nissan or Renault wowed owners in our 2017 Driver Power satisfaction survey, finishing 20th and 22nd respectively out of 27 manufacturers. 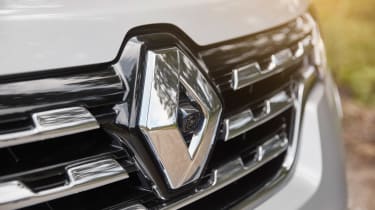 It’s easy to speculate on the Alaskan’s safety credentials because the Nissan Navara, on which the Alaskan is based, has already been tested by Euro NCAP, scoring four out of five for overall safety and matching the Mitsubishi L200. However, if you want the safest pickup, the Toyota Hilux fitted with Toyota’s Safety Sense pack scored five stars.

If the Alaskan matches the Navara in price, it should be competitive against rivals

Prices for the Renault Alaskan have yet to be announced because its launch in the UK has been delayed. If and when it does arrive here, it’s likely to be closely matched to the Navara, with prices starting from around £25,000 and finishing around the £35,000 mark. If this proves to be the case, the entry-level trims would just undercut an entry-level Fiat Fullback and be considerably cheaper than the pricey Volkswagen Amarok. Despite its shared underpinnings, the Alaskan is also likely to cost quite a bit less than the Mercedes X-Class, thanks to the Merc’s upmarket badge and more luxurious interior. 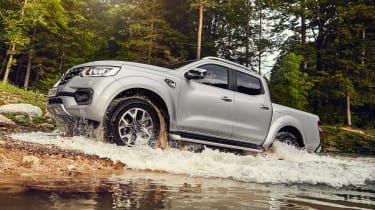 Pickups aren’t generally known for their interior options, but the Alaskan is likely to have a fairly lengthy list of accessories. This is likely to include a hard-top for the loading bed, different options for the cargo bay liner and essentials like a tow bar. 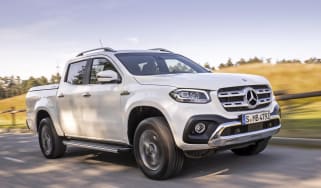