The Clio Renaultsport 200 is much more comfortable than the old car, but the interior feels cheap

Slide into the driver’s seat of the Renault Clio Renaultsport 200 and you’ll immediately notice the body-hugging side bolstering of the car’s standard sports seats, which are finished in nicer material than you’ll find in models lower down the range.

Every journey can’t be a spirited run down your favourite back road, though, and the new Clio Renaultsport 200 acknowledges this by offering vastly improved refinement and comfort compared to its predecessor – the cabin is quiet at motorway speeds and the suspension has a degree of compliance that was absent before.

From the driving seat, the Renault Clio RS’s interior is awash with light-coloured plastics that don’t have the same air of quality of the darker plastics you get in a Volkswagen Polo GTI. Key touch points like the gearlever, indicator stalks and stereo controls have a hard, rough finish that wouldn’t feel out of place in a 10-year-old car, let alone a brand-new model. 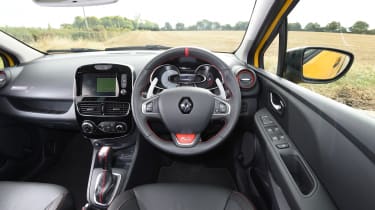 All models get a seven-inch touchscreen and Renault has made an effort to spruce up the cabin of the sporty Clio with flashes of red trim, but they’re not enough to mask the interior’s obvious deficiencies.

The EDC Lux also has wing mirrors that fold out of harm’s way when the car is parked, climate control that maintains a pre-set temperature, rear electric windows, plus automatic headlights and wipers.

The 220 Trophy boasts the same equipment as the EDC Lux but has model-specific 18-inch alloy wheels, plus an array of Trophy branding throughout.

One of the most popular Clio Renaultsport upgrades is the £650 Cup Pack, which gets its name from the Renault Clio Cup racing championship. It makes the car quicker in corners thanks to bigger 18-inch alloy wheels and a suspension system that’s been stiffened by 15%, but also makes the car harsher and less comfortable. On the 220 Trophy you can also add bucket seats, and a black roof and spoiler if you wish. An Akrapovic exhaust system is £900.

You can always go the other way – making your Clio Renaultsport more comfortable and easier to use with items such as leather seats (£1,250), which can be heated (£250), and a rear parking camera (£250). There's now a Bose sound system on offer that includes a subwoofer in the boot.