One of the biggest advantages of the Renault Clio Renaultsport is its five-door body, which means it’s much more practical than three-door-only rivals such as the Peugeot 208 GTI and Ford Fiesta ST. A sportier three-door model is no doubt missed by the enthusiasts who bought the old model, even if the current car’s rear doors have hidden handles to fool the eye into thinking it’s a three-door.

Under the new body, this car sits on the same basic chassis as the previous Clio, but it’s been lowered and widened to free up more space inside.

As with most superminis, front-seat space isn’t a problem in the Clio – adults of all sizes should be able to stretch out easily. The car’s rear doors mean that getting in the back is easy, however the rear seat is mounted quite high, and when combined with the sloping roofline and small rear windows, it can feel claustrophobic in the back. Adult passengers close to six feet tall will feel their heads brushing the roof and the rear seat (although wider than the old car’s) is still quite narrow, so squeezing three people alongside each other is unlikely to be a popular move.

There are plenty of storage spaces to be found in the cabin, with pockets in the doors and centre console, plus a handy slot for your sunglasses or phone in front of the gear selector. If you fill them all, though, you’ll be stuck, as there’s no space for any loose items in the tiny glovebox. That’s a side effect of poor packaging when the car was converted from left to right-hand drive.

The boot of the Renault Clio is one of the biggest in its class – a capacity of 300 litres allows it to carry more luggage than either the Ford Fiesta or Peugeot 208 – but brand-new models such as the Skoda Fabia and Mazda2 offer even more space. 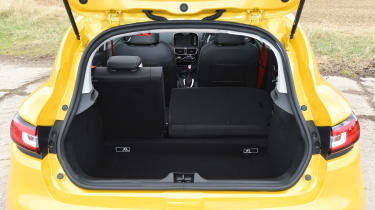 The rear seats split and fold in a 60:40 ratio and the tailgate is nice and wide, so loading wide or awkwardly shaped items is easy. The rear seat backs don’t lie totally flat once folded, but a maximum carrying capacity of 1,146 litres should be just enough to cater for most small families.