It’s more comfortable than before, but the Clio Renaultsport 200 has lost some of the old car’s driver involvement

This more mature Renault Clio Renaultsport 200 is better able to deal with lumps and bumps than the stiffly sprung old car. That makes it more comfortable in town, but also means it doesn’t get knocked off course as easily if you drive fast down a bumpy British B-road. The downside is that there’s more body lean in corners and it can’t be flung around bends with quite the same gusto as the old model.

The responsive steering of the old model has also been dampened down. The car feels less edgy to drive, but has lost some of the old Clio’s feel, so it’s not as easy to judge how much grip the front tyres have left at any given moment.

The 220 Trophy was added to the range as a more hardcore version of the 200, so it has quicker steering, lower and stiffer suspension and faster gearchanges. The result is a more focused car that is sharper to turn in and has a more alert, direct feel. The stiffer suspension isn't unbearably firm, so the 220 doesn't crash over road imperfections and still manages to be reasonably comfortable on longer drives.

It's still not as rewarding as a Volkswagen Polo GTI to drive though, thanks in part to the lack of a manual gearbox, and it doesn't generate as much grip as a Ford Fiesta ST, but it's still the best Clio to buy from an enthusiast's point of view. 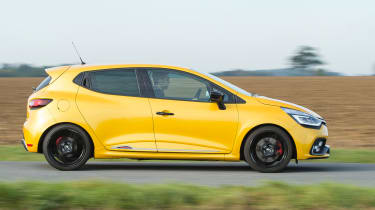 The twin-clutch EDC gearbox means the level of involvement isn't as high compared to the previous model (which had a six-speed manual gearbox), let alone the Polo GTI, even if it changes gear quicker and leaves two hands free to focus on the important task of steering the car. Once again the 220 Trophy is an improvement, offering 50% quicker changes than the 200 but it still isn't as involving as it was before.

The net result of all this is that the new Clio is much easier to drive quickly, but not as much fun as the old model. The Ford Fiesta ST isn’t as comfortable or as hi-tech, but it beats the Clio hands-down when it comes to putting a smile on your face.

Renault’s revised way of thinking is also evident in the new 1.6-litre petrol engine. By fitting the Clio with a turbocharger, Renault has made the performance of its hot hatchback more accessible. Gone is the peaky nature of the old car, which required lots of gearchanges to keep the engine on the boil. In its place is mid-range flexibility, which means you can bank on the engine’s power to pull the car out of corners or in high gears.

Aided by a standard launch-control system, the Clio Renaultsport 200 gets from 0-62mph in 6.7 seconds – that’s a few tenths of a second quicker than the old model and also faster than the Ford Fiesta ST can manage. Thanks to the extra 20bhp, the 220 Trophy is a tenth faster, getting from 0-62mph in 6.6 seconds.