One of the reasons hot hatchbacks are so popular is that they offer sports-car performance with running costs comparable to a normal hatchback’s. Don’t expect miracles, though – the Clio Renaultsport is much faster than any other model in the Clio line-up and its fuel economy reflects this.

That’s not to say the new car doesn’t make improvements over the old model. MPG has increased by 30% over the 2.0-litre model it replaced, so that the 200 Turbo can return fuel economy of up to 47.9mpg compared to the old model’s 34.5mpg.

CO2 emissions have also been slashed from 190g/km to 133g/km, so that the car’s road tax bill has dropped from £265 a year to £130. Despite the extra power in the 220 Trophy, it claims an identical mpg figure and is in the same tax bracket as the 200 models. The new 1.6-litre turbocharged engine’s power is more accessible, meaning you don’t have to wring its neck to make good progress and the claimed fuel-economy figures easier to achieve than before. 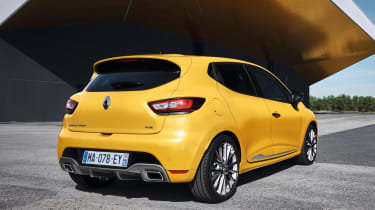 The sporty Clio also has the strongest second-hand values in the whole line-up – the EDC should hold on to 47% of its original value after three years or 36,000 miles, while the EDC Lux’s figure is slightly lowers, at 46%.

Insurance groups for the standard Clio line-up range from 7 to 12, but fitting a 197bhp engine to the car sees the top-end figure more than double to group 29. That’s the case whether you choose the standard car, the better-equipped Lux model or the 220 Trophy.

The car’s service interval is once a year or every 12,500 miles, whichever comes first, while the more expensive major service falls due at 18,000 miles. Parts and labour should be relatively affordable, but on the downside, French brands such as Renault consistently perform poorly in customer satisfaction surveys, so the level of dealer service may fall short of what you expect.