Doors and windows are optional extras on the Renault Twizy

It's never been easier to look at a car and assess its practicality in one glance. The Renault Twizy doesn't leave much to the imagination. It's only 2.34 metres long (a Smart ForTwo measures 2.7 metres) – roughly half the size of a standard city car. Renault reckons you can fit three Twizies widthways in a standard parking space.

The Twizy's roof, half-height doors and four wheels give extra protection from the elements compared to a standard scooter. Its turning circle is tiny, so u-turns are easy, but it's a tad too wide to drive between traffic like a bike.

It’s best thought of as a slightly more practical alternative to a scooter. It has obvious appeal when the weather is sunny and hot, but drive it on a damp November morning, and you’ll wish you’d invested in some warm, waterproof clothing. Even with the optional doors fitted, rainwater will freely enter when you’re on the move.

All versions of the Twizy get two glove compartments, one either side of the speedometer, that offer eight more litres of storage space. Drivers over six feet tall and any passenger will be relatively comfortable on short journeys – unless it's raining of course, in which case the wisdom of spending extra on the optional doors and windows becomes abundantly clear. 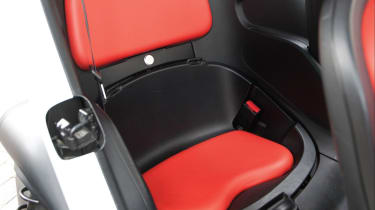 You can also order an optional booster seat for the back, plus a blanket to keep you warm in the winter.

In Expression and Dynamique trims, there’s no boot to speak of, but it does have a 31-litre lockable storage cubby under the rear seat that's large enough to carry some small bags, a laptop or a modest amount of shopping. It's a bit fiddly to open and close, though, and its piddly lock wouldn't stop a determined thief from pinching your iPad.

The Renault Twizy Cargo was conceived as a commercial vehicle for round-town firms delivering small loads. It trades the rear passenger seat for a 180-litre boot capable of carrying up to 75kg. 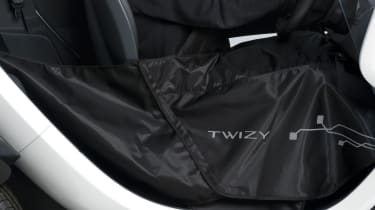