One of the beauties of electric cars is that there are comparatively few moving parts, and therefore less to go wrong. The Renault Twizy is an extreme example of this, because there aren’t that many moving parts inside the car either.

Electric car technology is still quite new to most buyers, but at least the Twizy uses a battery lease plan that makes replacing its power packs straightforward if anything goes wrong.

When it comes to general reliability, the rest of the car is so simple that there simply isn't much that could actually break down.

Renault also covers breakdown repairs at the roadside and recovery to your nearest Renault Z.E. dealer within the purchase price for three years.

The Twizy hasn’t sold in sufficient numbers to be included in the Driver Power customer satisfaction survey, but its maker Renault was improving, climbing from 15th place in 2014 to seventh in 2015. However, in our 2019 Driver Power survey it had slipped significantly to 19th place out of 30 manufacturers, before rebounding slightly to 15th in 2020. 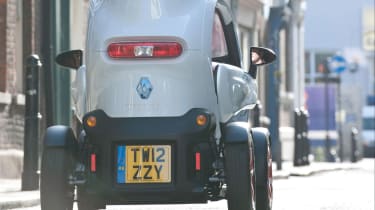 As the Renault Twizy is classed as a quadricycle, it’s not subject to the same minimum safety requirements as a car. It has been crash tested by Euro NCAP, and while it fared better than most other quadricycles, it still only scored two out of five stars. It still offers far less protection than a normal car would provide. If safety is a concern, we’d recommend looking elsewhere.

The Twizy features a driver’s airbag and a four-point front seatbelt and a three-point rear seatbelt.