The petrol engine available in the Audi RS3 is more economical than ever, but still uses plenty of fuel

The RS3 is extremely quick and it’s not a cheap car to fuel or insure. The engine available has been tweaked to make it more economical than before, despite all the power on offer. Audi is one of the more upmarket brands, meaning parts and servicing will never be the cheapest, but its cars are reliable on the whole and there are servicing packages available.

There’s just one engine available in the Audi RS3: a powerful 2.5-litre turbocharged petrol that makes performance rather than economy its primary consideration. 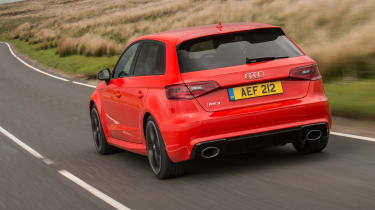 It’s the same engine used in the previous RS3, but Audi has managed to squeeze more power out of it while improving efficiency by 12%. That’s resulted in a claimed fuel-economy figure of 34.9mpg, with CO2 emissions of 189g/km translating to a road tax bill of £290 a year.

The Audi RS3 is very powerful and intended for drivers who'll use its performance on a regular basis. Cover therefore won’t be cheap, with the RS3 falling into low-to-mid-forties insurance groups.

The RS3 comes with a three-year/60,000-mile warranty. You can extend it to four years/75,000 miles for an extra £245 or five years/90,000 miles for £545. There are longer standard warranties on the market, but Audi does at least have a good reputation for the reliability of its cars.

The RS3 has two different service schedules, depending on exactly how and how far it's driven. Low-mileage drivers who typically do short journeys can choose a fixed schedule of every 12 months. Drivers who cover more than 10,000 miles a year are placed on a variable schedule.

Audi offers a number of options to spread the cost of servicing. The Audi Complete plan has three levels, with the cheapest being service-only, which covers all services for the first three years. The Service and Maintenance plan adds cover for engine, suspension, gearbox and brake components, as well as three years of breakdown cover. The final level of cover (Service, Maintenance and Tyres) also includes replacement tyres – with a fair-use clause – as well as related alignment and puncture repairs.