The Audi RS3 has excellent safety and reliability credentials

Audi has a good reputation for reliability and the A3 on which the RS3 is based scored five stars in Euro NCAP crash safety tests. The car has four-wheel drive – which gives it plenty of grip – and powerful brakes. Both help to make it safer.

Audi is famed for the quality and reliability of its cars and the RS3 shouldn’t be any different. We put the car through its paces when we tested it, repeatedly using the launch-control system (which puts a fair bit of a stress on the gearbox and engine) and it felt like it could have gone on all day.

Audi A3 owners seem to be pretty happy with their cars, too, based on its 47th-place finish in the 2016 Driver Power customer satisfaction survey. It scored particularly well for build quality and in-car tech, but reliability is a slight cause for concern.

The RS3 is based on a platform used by several cars in the VW Group, which makes it lighter than the previous model. It also uses a large number of common components already proven throughout the VW, Audi, Skoda and SEAT ranges. 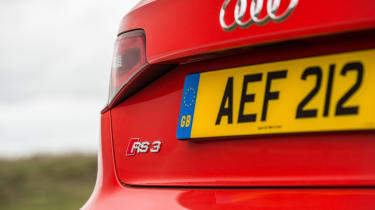 If you plan to use your RS3 on track (even though we think it’s more suited to the open road then a race circuit) or drive it particularly hard on a regular basis, then it might be worth ordering the optional carbon-ceramic brakes for their longer lifespan and superior performance.

The Audi A3 scored a full five-star rating when it was crash-tested by Euro NCAP and there's a whole raft of safety systems to help prevent accidents. These include lane-departure warning and a 'Pre-Sense' program that tightens up the seatbelts and closes the windows if it detects the car starting to skid.