More space in the boot, but the saloon version of the Audi A3 won’t suit everyone

The Audi A3 Saloon is longer than the hatchback, which means parking won’t be as easy. However, visibility is better than in a Mercedes CLA-Class, which has more blind spots because of its plunging roof pillars.

Audi A3 interior space and storage

Extra rear legroom makes the A3 Saloon a comfortable car for four adults to travel long distances in, with enough room on the rear bench for three for shorter trips.

But headroom could be a problem – the sloping roof means the A3 Saloon is less roomy than the A3 Sportback. This issue with limited headroom also affects rivals such as the Mercedes CLA and BMW 3 Series. If you’re travelling with kids, it’s not a problem, but fitting a child seat could be troublesome.

There’s storage space in the centre console for your loose change, a decent-sized glovebox, cup-holders and a compartment between the front seats under the armrest that flips up on demand. The door bins aren’t the most practically shaped, but you can squeeze a large bottle of water in there. 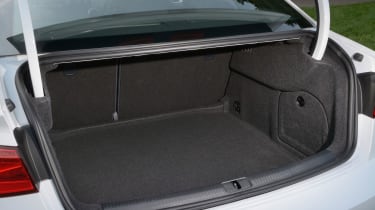 The transformation from hatchback to saloon has added an extra 60 litres of boot space, increasing capacity to 425 litres. Choose four-wheel drive, however, and the resulting chassis modifications reduce boot space to 390 litres – just 10 more than the hatchback. There’s a little more room in the Mercedes CLA’s 470-litre boot, but the BMW 2 Series Coupe only has 390 litres of luggage space.

It’s also worth noting that folding the rear seats down only increases luggage space to 880 litres, because you can’t load up to the roof like you can in the hatchback. The boot opening is also smaller, so if you're a furniture shopaholic, the Audi A3 hatchback or five-door Audi A3 Sportback might be a better bet. A space-saver spare wheel is included as standard for temporary use if a tyre is punctured.