"The Audi A3 Saloon looks sharp and has a fantastic interior plus a great range of engines. It’s surprisingly practical, too"

Offered alongside the five-door A3 Sportback and stylish A3 Convertible, the A3 Saloon goes head-to-head with the Mercedes CLA saloon. Although compact saloons have traditionally been less popular in the UK than in some other markets, the A3 Saloon makes an interesting alternative to the larger Audi A4 saloon.

The A3 Saloon has several comparable rivals, with the BMW 2 Series Gran Coupe, Mercedes A-Class Saloon, and CLA Coupe models all billed as four-door variants of existing hatchback models. The saloon is a little longer than its A3 hatchback stablemate, and this extra length has been used to give rear-seat passengers greater legroom. It also provides a spacious boot, although it’s not such a capable load-lugger as the outgoing A3 Sportback on which it's based, as it lacks that model’s wide-opening tailgate. 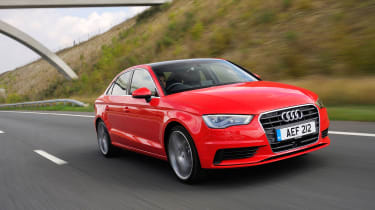 The A3 Saloon builds on all the virtues of the Sportback, sharing its crisp design and extremely impressive build quality. Nowhere is this more evident than inside, where the dashboard is brilliantly designed and all the interior materials are from the top drawer. You’ll not hear a squeak or rattle even on the roughest roads – and the saloon shows this off to good effect thanks to being notably quieter inside than any other A3.

The A3 Saloon is a very good-looking car. It’s a near double for the larger A4, its identity only given away by having a greater proportion of glass area to metal. Although all models are smart and understated, the A3 Saloon really comes to life when dressed up in sporty S line trim, with special alloy wheels, a slightly lower ride height and a subtle but effective bodykit.

It’s an enjoyable car to drive, but can’t quite match the two-door BMW 2 Series coupe for driver appeal, thanks to the impeccable balance of that car’s rear-wheel-drive chassis. All models are reasonably swift and it doesn’t follow that the most powerful models are the most appealing. In fact, our favourite is the middle-of-the-range 148bhp 1.4-litre TFSI turbocharged petrol.

This modern engine is very smooth and is fast enough for most drivers, while costing rather less to buy and run than the more powerful 2.0-litre engine. If you prefer diesel or if you’re a high-mileage driver, the best all-round engine is the 148bhp 2.0-litre TDI, which is both economical and powerful. 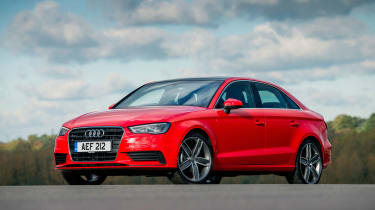 If you’re not bothered about low running costs and want something with a bit more performance, there’s always the S3 Saloon, which is powered by a 306bhp 2.0-litre turbocharged petrol and comes with Audi’s quattro four-wheel drive system. It’ll blast from 0-62mph in less than five seconds and easily keep up with most sports cars.

Choosing your A3 Saloon won’t take long, as aside from the S3, there are only two trim levels to choose from. Sport Nav is well equipped, but our favourite is S line Nav, whose muscular styling and extra kit make it more desirable. It costs more than the Sport Nav, but we think it’s worth it. You can also deselect the S line’s firmer suspension at no cost, so you can still benefit from the Sport’s more relaxed ride.

The A3 enjoys a five-star safety rating from independent crash experts Euro NCAP, and, while the brand finished a mid-table 21st out of 26 in our 2020 Driver Power owner satisfaction survey, that's a far better result than BMW or Mercedes could manage. Overall, the closest rival to the A3 saloon is, arguably, the A4 saloon, and the smaller car has the advantage of a much lower price.

Audi introduced an all-new A3 Saloon for 2020, which shares its styling and technology with the new A3 Sportback hatchback. It’ll arrive in showrooms later this year, meaning the outgoing A3 Saloon is currently only available to buy from stock. A range of new petrol and diesel engines will be available at launch, with a performance-focused S3 model arriving later in the year. An all-new version of the range-topping RS3 is expected to be revealed in early 2021.