"The BMW 3 Series is the small executive saloon we judge others against. It has set the class benchmark for many years"

While many new types and classes of car have emerged in recent years, the BMW 3 Series has simply evolved over time to become a comfortable and efficient car that’s also great to drive.

It has many rivals, of course – not least old adversaries the Audi A4 and Mercedes C-Class, plus more recent arrivals in the shape of the Jaguar XE and Alfa Romeo Giulia. Each has its strong points and is a perfectly valid alternative to the BMW, but even so, for many people, the 3 Series remains the default choice.

Its engines are extremely efficient, the best in this respect being the 330e plug-in hybrid, which can see up to 148.7mpg. They’re powerful, too – the quickest being the 340i that can go from 0-62mph in 5.2 seconds. 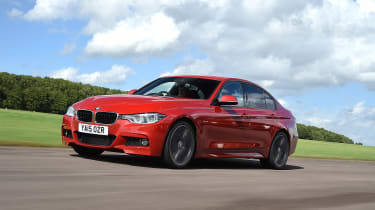 The 320d diesel, some versions of which can return up to 65.7mpg, will suit most drivers, though. It’s no slouch, being capable of 0-62mph in as little as 7.2 seconds, again depending on which version you choose. It especially appeals to company-car drivers, and has emission-reducing AdBlue technology to reduce Benefit-in-Kind (BiK) ratings even further.

The four-door saloon is the big seller, but if you need to carry bulky loads, there’s also an estate version called the BMW 3 Series Touring. If you like more luxury with your practicality, there’s the BMW 3 Series GT with its five-door hatchback body style and generous standard equipment. For performance lovers, there’s the BMW M3 saloon. We’ve reviewed all these variants separately.

Regardless of which body style you go for, the 3 Series’ impressive ride and handling come as standard. It’s fun on a twisty road and comfortable on a long motorway journey. It’s not too big, so is easy to drive in town, especially in automatic form, and being barely larger than a family hatchback it can take advantage of most parking spots.

From the driver's seat, the dashboard is fairly traditional in its layout, but everything has been honed over the years to be very logical and robust. There’s plenty of room with four adults onboard, while the 480-litre boot should provide enough space for their luggage.

Features like air-conditioning, Bluetooth, DAB digital radio and even sat nav are standard with the first trim level, which is called SE. With sporting flourishes inside and an exterior makeover, the Sport trim is tempting, while M Sport models look even more athletic and get upgrades like leather upholstery. As an alternative to the M Sport, BMW’s Luxury trim gives the 3 Series a more comfort-orientated brief. Every BMW also comes with ‘remote services’, allowing the car’s status and some of its functions to be accessed using a smartphone app.

Unlike predecessors, the current 3 Series is available with xDrive, which is BMW’s four-wheel-drive system and costs around £1,500 extra. You can also choose a 3 Series EfficientDynamics (or ED for short) model, which has specification changes to make it as frugal as possible.

The BMW 3 Series range finished 37th out of the 75 cars ranked in our 2017 Driver Power owner satisfaction survey of cars currently on sale in the UK.

Safety is assured by a five-star rating in Euro NCAP crash tests.