If you're looking for a practical and spacious family car, then the 3 Series saloon is probably best avoided. It's not that the BMW is cramped, but it's smaller inside than mainstream family saloons such as the Volkswagen Passat or Skoda Superb.

The latest version of the 3 Series is the biggest yet. There's now adequate head and legroom for rear-seat passengers – although the high transmission tunnel that runs down the middle of the car means anyone sitting in the middle has limited space for their feet. There are no such problems up front, where the driver and passenger can easily get comfortable.

BMW has also included lots of useful storage space, such as a large glovebox, decent-sized door bins and a pair of cup-holders in the centre console. There are also map pockets in the backs of the front seats. ISOFIX child-seat mounts are standard on all models, but the doors don’t open quite as much as on some conventional family hatchbacks and MPVs, so check that you can comfortably lift your children in and out of the back seats before buying.

Visibility is good, but you'll want to choose the optional parking sensors, as it can be hard to judge the car’s dimensions when reversing. The big alloys on M Sport models will mark easily if you regularly come into contact with kerbs, so if you do a lot of town driving, avoid these.

The boot will hold 480 litres, which is identical to what you get in the Audi A4 and Mercedes C-Class. It’s also bigger than the Jaguar XE’s offering. More importantly, it has a more user-friendly layout, with less intrusion from suspension components, so sliding larger items in should be a much easier task. It's not all good news, though, because split-folding rear seats are an optional extra. The plug-in hybrid 330e has a smaller boot at 370 litres, but it's still not too bad for a car of this size.

Buyers who want a little more space should take a look at the BMW 3 Series Touring estate. With all seats in place, it'll swallow 495 litres of luggage (measured up to the bottom of the window line), while lowering the 40:20:40 split-folding rear seats results in a healthy 1,500-litre capacity. 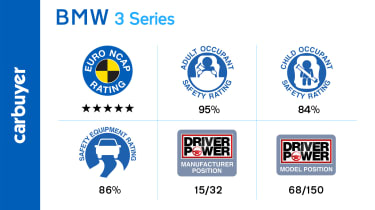 Another practical option is the BMW 3 Series GT, which offers the interior space of a BMW 5 Series saloon, but with a versatile hatchback bootlid. However, it's expensive and the slightly bulbous looks won't be to all tastes.

If you're looking to tow a caravan or trailer with the 3 Series, then choose the 320d or any of the six-cylinder models, as they can pull a hefty 1,800kg – although note EfficientDynamics models can’t be fitted with a tow bar. Better still are the four-wheel-drive xDrive versions, as they boost stability and traction when towing in slippery conditions.