The BMW 3 Series is quite expensive to buy, but once you take that initial hit, you'll be rewarded with remarkably low running costs. For instance, all diesel versions return more than 45mpg and even the most powerful six-cylinder diesel emits less than 170g/km of CO2.

For high-mileage drivers, the BMW 320d ED is the best bet. Thanks to clever aerodynamic tweaks and one or two mechanical changes, the automatic version of the 161bhp 2.0-litre diesel emits 115g/km of CO2 and promises to return up to 65.7mpg. It also makes the 3 Series a very tempting company-car choice, because it costs business users less in Benefit-in-Kind (BiK) tax. Road tax for all diesel and petrol BMW 3 Series costing under £40,000 is £140 a year, with models costing above this taxed at a higher rate of £450 in years two to six of ownership. If you opt for the hybrid 330e model, tax will be £130 a year, or £440 a year if its price with options tips over the £40,000 threshold. 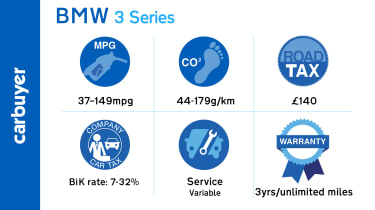 Incredibly, this model is even more efficient than the cheaper (and slower) 316d and 318d, which use less powerful versions of the same 2.0-litre diesel engine. BMW also offers a range of faster but less economical diesel engines in the 3 Series. The 330d promises a respectable 51.4mpg, while even the top-of-the-range BMW 335d xDrive M Sport four-wheel-drive model manages 45.6mpg while emitting only 164g/km of CO2. Check the car's CO2 emissions carefully, though, because different wheel sizes and choosing an automatic gearbox can have an impact on them.

If you aren't racking up lots of miles every month, then one of the petrol models should suit. They aren't as thirsty as you'd think, as they have much of the same fuel-saving kit as the diesels, such as stop-start and brake-energy regeneration (which uses energy that would otherwise be lost to power things such as the air-con).

All BMW 3 Series petrols are turbocharged, with four or six-cylinder engines available. The quickest model in the standard 3 Series petrol lineup is the 340i, and it's also the most expensive to run. Fuel economy is about on a par with equivalent C-Class, A4 and XE models but significantly down on the powerful diesel 3 Series. 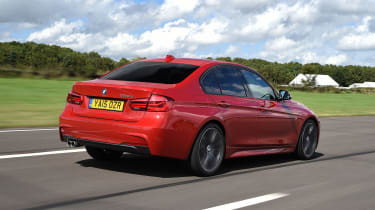 If you’re after even lower running costs, the BMW 330e plug-in hybrid can travel up to 25 miles on electric power alone – enough for many typical commutes. BMW claims it’s capable of up to 148.7mpg, while CO2 emissions of as little as 44g/km means it escapes the London Congestion Charge. With prices starting at just under £34,000, the 330e plug-in hybrid is expensive, although a £2,500 Government grant will help lessen the financial sting; company-car drivers will also welcome the very low 9% BiK rate the 330e attracts.

Expensive repair costs and a high-performance image mean you're likely to pay more for BMW 3 Series insurance cover compared to some rivals. Even the entry-level diesel falls into group 18.

All BMW 3 Series benefit from BMW's three-year/unlimited-mileage warranty, which also includes breakdown recovery for the same period. As with rivals, it's possible to extend the cover at extra cost.

It's not just the 3 Series' fuel and tax bills that should be lower than those of rival compact-executive models. BMW offers an excellent pre-paid servicing scheme called BMW Service Inclusive that can take care of regular maintenance for three years or 36,000 miles for £400. Upgrade to the Service Inclusive Plus pack and BMW will cover the costs of any brake and clutch changes, too.

Another financial incentive for choosing the BMW – particularly if you're a private buyer – is its excellent resale value. Our experts predict that the 3 Series in its various forms will retain around 50% of its value after three years, which is a good deal more than many mainstream rivals. So, while a 3 Series costs more to buy, you'll reap the rewards in the long term.