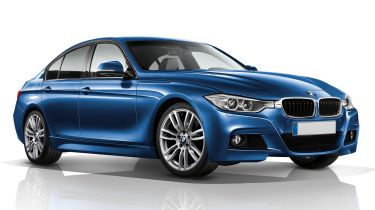 It’s incredible to think that the BMW 3 Series has been on sale for almost 40 years and that six generations on, time has done little to dent its appeal.

In fact, we think the latest version is the best in the business, declaring it our winner of the 2014 Carbuyer Best Executive Car award, despite stiff competition from the likes of the Mercedes C-Class, Audi A4, Lexus IS and the new Infiniti Q50.

The current BMW 3 Series is available in six trims, but opt for the M Sport and you miss out on the two entry-level engines, the 316i and the 316d, but there’s still a wide range of efficient petrol and diesel options.

Standard spec is high on all M Sport models, but most will be attracted by its BMW M3-inspired looks thanks to its M Sport bodykit, lower sport suspension, sportier front and rear bumper and large 18 or 19-inch wheels. Inside there’s a leather interior with supportive sport seats, parking sensors and climate control.

As we’ve already mentioned, the BMW 3 Series is our favourite executive car – and for good reason, too.Its range of engines make it one of the most efficient models in its class. The interior is a comfortable place to spend time, the dash is clearly laid out and we think it feels like it’s well made.There’s also plenty of kit, but the biggest reason to order a BMW 3 Series over its rivals is due to the fact it's loads of fun to drive. Nothing else in its beats its agile handling and all the engines are smooth and powerful.

If we are going to level criticism at the BMW 3 Series it would be that it still only offers average space for passengers and the boot could be bigger with a lower lip for ease of loading.Be careful with options too, they all add up to dramatically inflate the list price of your new car.

The BMW 325d M Sport offers the best of all worlds. High-power BMW M3 looks, sportscar pace, great handling, plus the ability to average 58mpg – making it one of the best all-rounders on the market.