The Audi A3 Sportback delivers a mature blend of predictable handling, a comfortable and quiet ride, plus smooth and effortless performance

The Audi A3 Sportback’s petrol and diesel engines are notable for their smooth and punchy power delivery, so deciding between them may come down to their respective economy and emissions figures.

There really is an engine for all tastes, with the smaller petrols providing a good blend of price and performance, while the diesels suit higher-mileage motorists who want good economy with effortless cruising ability, or those who need to tow a caravan.

Drivers looking for easy around-town driving and respectable fuel economy should consider the entry-level 1.0-litre 30 TFSI. It produces 114bhp, which is enough to propel the car from 0-62mph in 9.9 seconds. The power seems well spread over the rev range too, offering plenty of oomph from low to high revs. It's also a remarkably refined engine, quieter than many of its rivals, while its relative lightness makes the A3 peppy and quite fun to drive.

Unsurprisingly, the 1.5-litre 35 TFSI’s superior 148bhp provides slightly improved performance and, given the car’s balance of price and efficiency, it’s our pick of the range. The cylinder-on-demand (half the engine shuts down under light throttle) 1.5-litre TFSI is a relaxed cruiser, but it’s sporty, too, with 0-62mph taking just 8.2 seconds. The 187bhp 2.0-litre 40 TFSI takes just 6.8 seconds, but fuel economy takes a hit. 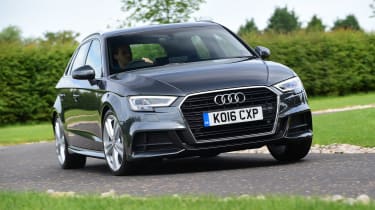 The A3 Sportback’s diesel engines really do offer an almost-unmatched cocktail of refined yet thrilling performance and excellent fuel economy, although low-mileage drivers should weigh up their higher purchase price compared to the equivalent petrol car.

The Audi A3 e-tron is a plug-in hybrid that combines a 148bhp 1.4-litre TFSI petrol engine with a 101bhp electric motor for a total output of 201bhp. The 0-62mph sprint time is dealt with in a brisk 7.6 seconds, owing to the instant power delivered by the electric motor at low speeds. The suspension is quite firm to keep the car from leaning too much in corners, but the extra weight of the batteries is noticeable, and the e-tron isn't really a car intended to be driven quickly regularly. If you go for large alloy wheels, the suspension setup means bumps, potholes and cat’s eyes will all be very noticeable inside the car.

The e-tron comes with a smooth six-speed automatic gearbox, which only struggles when the car has to transition between the pure petrol and pure electric modes - on occasion it can get clunky in these instances.

Before the e-tron was facelifted in mid-2016, there was a mode that allowed the petrol engine to act partially as a generator to top up the batteries for the electric motor. Audi decided this affected economy too negatively, so now there are three modes; a pure electric mode, a hybrid mode and a mode which conserves battery power so the electric motor can be prioritised for use in urban areas. 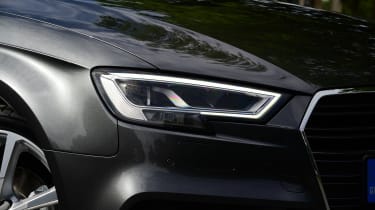 The hard-riding S line and Black Edition versions sit 15mm lower than the standard Sportback, but it’s possible to specify standard suspension at no extra cost. With this fitted, the Audi serves up predictable front-wheel-drive handling, a comfortable and quiet ride with minimal body lean in corners, plus smooth and effortless performance.