The Audi A4 Avant estate is a great all-rounder, but lacks a bit of excitement

As good as the Audi A4 Avant is, if you want an executive estate that’s fun to drive, the BMW 3 Series Touring is still the car to go for. But that’s not to say the Audi A4 should be ignored. Although it's not particularly entertaining, it has direct steering, limited lean in corners and plenty of grip.

Choosing the SE model means you get the more comfortable suspension and with this set-up the A4 Avant arguably has the best ride of all its main rivals, the aforementioned BMW and the Mercedes C-Class estate. However, it isn’t quite so good on larger alloy wheels. Quattro models have four-wheel drive to give the car more grip, which helps when driving on slippy roads or in bad weather.

The most efficient 168bhp 2.0-litre Ultra model of the A4 Avant combines the best fuel economy of the range with a 0-62mph time of 8.6 seconds. That makes it our pick of the line-up. Forget rattly eco-friendly models of days gone by: the A4 Avant Ultra is smooth, refined and powerful – only getting noisy when you really put your foot down.

Although the 134bhp TDIe model is cheaper and offers near-identical fuel economy, it takes a longer 9.6 seconds to cover 0-62mph and has less mid-range punch.

None of the other 2.0-litre diesel models offers enough of a performance boost to justify the increased running costs. And as good as the 242bhp 3.0-litre version is – with heaps of pulling power and a 0-62mph time of 6.1 seconds – it's destined to remain a niche choice. 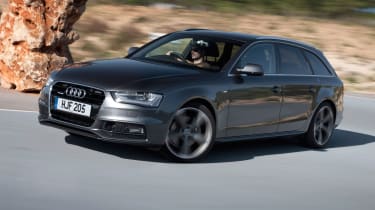 The entry-level 118bhp 1.8-litre TFSI petrol is best avoided, as it feels underpowered compared to the others, taking 10.8 seconds to do 0-62mph. It isn’t particularly economical, either.

There’s a 168bhp version of the same engine, which is a far better choice – the extra power makes it much more flexible and good for 0-62mph in 8.4 seconds. It actually has better fuel economy and lower CO2 emissions than the entry-level engine, too, so this is the one to go for if you do lower annual mileage or mostly town driving.

The 2.0-litre petrol version of the A4 uses the 223bhp turbocharged engine from the Volkswagen Golf GTI, so it’s hot-hatchback fast, doing 0-62mph in only 6.5 seconds.