Premium estate cars like the Audi A4 Avant aren’t the biggest load-luggers on the market, so if it’s outright space that you’re after, then it makes sense to look elsewhere – either to more expensive estates such the Audi A6 Avant or Mercedes C-Class estate or to a budget option with less badge appeal, such as the huge Skoda Superb estate.

However, the A4 Avant’s boot is bigger than the saloon’s and similar in size to those of key rivals such as the Mercedes C-Class estate and BMW 3 Series Touring. The Audi has a comparable footprint to its key competitors, too, measuring up at 4,699mm in length and 1,826mm in width, where the BMW 3 Series Touring is 4,624mm long and 1,811mm wide.

Audi A4 interior space and storage

The Audi has enough space to fit four adults comfortably, or two adults in the front and three children in the back, without much trouble. Though some passengers may find headroom in the rear a little tight, legroom should be fine.

The driver’s seat also has plenty of adjustment, so getting comfortable behind the wheel shouldn’t be difficult, either. Useful storage areas include a decent-sized glovebox, door bins and cup-holders.

Parking is made easier by rear sensors, which come as standard, so manoeuvring in tight spaces shouldn’t be too much of an issue. There are also three ISOFIX child-seat mounts as standard – two on outer rear back seats and one for the front passenger seat.

The A4 Avant has a 490-litre boot (10 litres bigger than the saloon’s) with the rear seats upright, which extends to 1,430 litres when you fold them down. That’s likely to be enough for most estate buyers, but the Audi’s two main rivals both do better in this area. 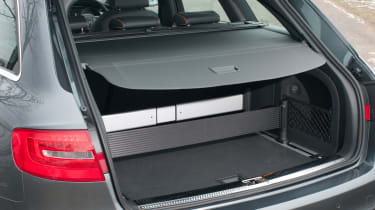 The rear seats don’t fold completely flat, but there’s no lip and a wide boot opening, so loading most items is easy and the boot also has nets and rings to help you secure your luggage. There’s also a space-saver rear wheel as standard on all estate models.

A diesel estate such the A4 Avant is always going to make a good tow car – and the petrols aren’t too bad, either. The least powerful 118bhp 1.8-litre TFSI petrol can handle a 1,500kg trailer, while some of the more powerful diesels are capable of hauling up to 2,100kg.