The Audi A4 Avant estate’s diesel engines are particularly economical

The Audi A4 Avant’s executive status means isn’t the cheapest estate car around, but it’s priced competitively against key rivals such as the BMW 3 Series Touring and Mercedes C-Class estate. Audi used values are strong, too, so the A4 will hold onto its value better than your average estate.

The A4 Avant has a large range of diesel engines, all of which are cheap run. Some err more on the side of economy and others trade some of that for more horsepower, but they’re all good performers in their own right. 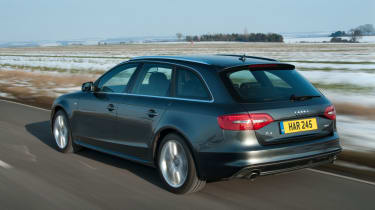 The A4 TDIe model is about as economical as the Ultra, managing the same 64.2mpg, but with marginally higher CO2 emissions of 116g/km, which makes no difference to road-tax costs. It’s also cheaper to buy, but the trade-off is less power (134bhp vs the Ultra's 161bhp) and less standard equipment, so it’s worth spending the extra if you can.

Other 2.0-litre diesel options include a 148bhp version (which does 60.1mpg and emits 124g/km of CO2) and a 176bhp model that's offered with the choice of either a manual or two kinds of automatic gearbox, as well as two and four-wheel drive (Audi calls the latter quattro). Audi claims fuel economy of between 51.4 and 58.9mpg and CO2 emissions ranging from 126 to 144g/km for these engines, so they’ll cost you between £110 and £145 a year to tax.

Topping the A4 Avant engine range is the muscular 242bhp 3.0-litre diesel. Its 47.9mpg fuel economy and CO2 emissions of 154g/km (£180 a year tax) are highly impressive given the performance on offer.

The petrol engine that provides the best mix of performance and fuel economy is the 168bhp 1.8-litre TFSI. The cheaper 118bhp 1.8-litre model is hard to recommend, as it doesn't reward you with significant fuel economy gains to compensate for its lack of power. Efficienct figures are 42.8mpg and 154g/km of CO2 for £180-a-year road tax.

The 168bhp version of the same engine is much better and actually more economical, returning between 46.3 and 47.1mpg and emitting from 139 to 141g/km of CO2 depending on whether you choose the manual or automatic gearbox. Road tax will be £130 or £145 a year respectively.

The 2.0-litre 223bhp model shares its petrol engine with the Volkswagen Golf GTI and provides plenty of power, but comparably poor fuel consumption of 40.9mpg and high CO2 emissions of 159g/km, so it’ll set you back £180 a year in tax.

Most versions of the A4 Avant sit around the middle of the insurance group table. The petrol-engined models are slightly cheaper to cover, starting at group 19 for the 1.8-litre 118bhp versions and topping out at 31 for the 223bhp 2.0-litre petrol.

Equivalent diesels are marginally more expensive to insure, but not by much. The lowest-rated model is the 134bhp TDIe, which is in group 21, while the 242bhp 3.0-litre model sits in group 33.

You get a three-year/60,000-mile warranty with the A4 Avant, which is the basic industry offer. This is topped by the Audi’s main rivals, the BMW 3 Series Touring and the Mercedes C-Class estate, both of which come with three-year/unlimited-mileage warranties as standard.

All versions of the A4 Avant have a 10,000-mile or one-year interval for minor servicing and a 20,000-mile or two-year interval for major maintenance. The exact cost of each service varies depending on the specific model. Audi offers fixed-price services for cars over three years old, charging £159 for a basic annual service and £309 for a two-year major service.