The boot in the Bentley Continental GT is large for this class, but its rear seats are cramped

Even though the Bentley Continental GT is a two-door coupe, it’s classed as a four-seater, with a 2+2 seat layout. The rear seats are small, but the boot is a decent size for this class of car and there’s a reasonable amount of storage in the cabin, too.

Front-seat passengers naturally get the best deal in the Continental GT. There’s loads of space, despite the chunky seats, while the dashboard isn't so bulky as to be overbearing.

It's back-seat passengers who may feel a bit cramped, as the sloping roofline reduces rear headroom. Legroom isn’t great either, particularly if the driver is over six feet tall. While the first-generation Supersports omitted rear seats to save weight, the latest allows you to share your fun with a couple of modestly sized friends. 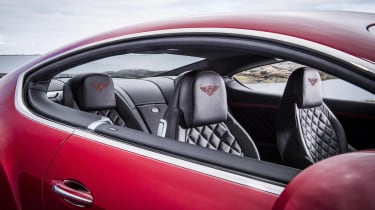 Interior storage is plentiful. If the back seats aren’t in use, they can easily act as a large storage area for small luggage cases or handbags. The glovebox is big enough to swallow up large water bottles and the central armrest covers a deep cubbyhole for smaller items like your phone or wallet.

The boot offers 360 litres of space, which is enough to carry two small suitcases or a set of golf clubs. It does have a relatively small opening, so fitting in large or boxy objects may be a little awkward. Overall, the Continental is one of the more practical members of the 200mph club.