The Bentley Continental GT is, it could be argued, the car that most closely recalls the glorious pre-war racing cars with which Bentley made its name. Broad-shouldered and long of bonnet, it has a look that suggests huge power, and its two-door coupe layout tells onlookers that this is a car to be enjoyed by its driver more than anyone else.

And, with the launch of the Continental Supersports, replacing the already formidable Continental Speed, Bentley has a car to match – and beat – the performance figures of its closest rivals. Although the ‘entry-level’ Continental rubs shoulders with rivals like the Mercedes-AMG GT for ‘Grand Tourer’ credentials. 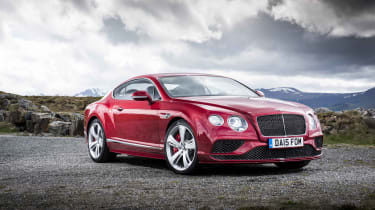 The range opens with the Bentley Continental GT V8, which is powered by a 4.0-litre petrol engine that can return up to 26.6mpg if you’re gentle. But while this is the smallest engine in the range, it’s far from a poor relation and offers 507bhp, enough for 0-62mph in less than five seconds. It’s hard to imagine needing more power than this, but the 6.0-litre W12 in the car simply named ‘Continental GT’ obliges with 575bhp. However, that’s just for starters.

Crowning the range is the Continental Supersports, which pulls out all the stops in that W12 for 700bhp. It’s said to be capable of 209mph, making it the fastest and most powerful Bentley ever. It’s also possibly the most aggressive-looking Bentley away from the race track, with carbon-fibre ‘aero’ parts, gloss-black highlights in place of chrome, a vented bonnet and smoked front and rear lights. It’s available as a coupe or convertible and only 710 buyers will get the chance to own one from new.

This isn’t to say the regular Continental doesn’t look the part – it does, just in a more low-key way than the Supersports. All models have a distinctive split lower grille and a contoured spoiler at the rear end. All in all, it’s a more genteel-looking car than the bulky first-generation Continental. 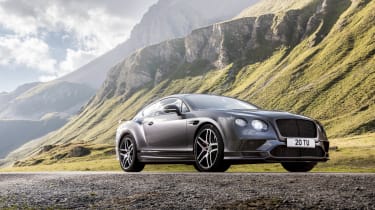 Inside, the Continental is just as much of a Bentley as outside. Occupants of every model are surrounded by handcrafted wood, leather and aluminium, all coming together to maintain the sporting feel, with enough space that you could even cite the Porsche Panamera as a rival – at least in the front seats. You can relax and look forward to the journey ahead in the knowledge that the Continental GT excels at long-distance cruising. Its slick eight-speed automatic gearbox, dependable four-wheel drive and soft suspension setup mean the Continental glides over the road.

The Continental’s size and weight work against it delivering delicate, poised handling like a Ferrari California T, but the more powerful models can certainly provide the raw, slightly brutal driving experience that many Bentley enthusiasts crave. The Supersports looks like going down in the history books with more power than ever.

But while the Supersports grabs the headlines, our favourite version is the Continental GT V8, which offers effortless power and smoothness, and even comes close to having reasonable fuel consumption. Plus, to our ears, it sounds better than the W12. Who’d have believed that less could be more in the rarified world of Bentleys?