No matter which engine you go for, all Bentley Continental GT models feel lightning-quick

More than anything else, it’s the way a Bentley drives that truly defines it. Every Bentley you can buy is designed to reward its driver and the two-door Continental GT is especially focused towards the person behind the wheel.

It’s blisteringly quick in a straight line, no matter which engine is under the bonnet, but even though its speciality is the rapid accrual of straight-line speed, the Continental GT’s appeal doesn’t end there – you just have to be familiar with the Bentley way of doing things.

The sheer size of the Continental GT suggests it won’t respond as deftly as the Ferrari California T – it’s a car that relies on grip and outright power rather than balance or precision. But once you’ve come to terms with its weight, the Continental GT comes alive, with precise steering and an impressive resistance to body lean. 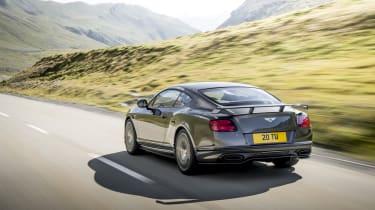 The Supersports sharpens the entire experience still further. Taking its underpinnings directly from the previous Speed model, it rides 10mm lower than the ‘ordinary’ GT, with stiffer springs and stout anti-roll bars. At 2,280kg, it’s still extremely heavy – despite lightweight carbon-ceramic brakes and a titanium exhaust – yet the steering is surprisingly effortless, cornering is flat and placing the car in corners is easy.

Despite its effectiveness through corners, the Supersports sacrifices little of the Continental GT’s loping, relaxed long-distance prowess – all-important Bentley qualities that the Crewe company knows to preserve. Yet we can’t help feeling that the far less expensive V8 version does everything so well that the W12 variants are a little redundant.

With its lighter engine, we reckon it feels just that little bit more precise in corners and we prefer its muted V8 bellow to the stifled bark of the W12. However, there’s another car from the VW Group stable that could be worth a try – the Audi R8. It’s not geared for comfort like the Bentley, but it’s four-wheel drive like the Continental and offers similarly formidable performance. It’s not a direct rival, but an interesting alternative. 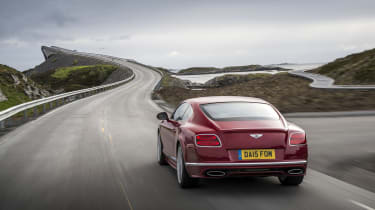 There’s no such thing as a slow Continental GT. The ‘lesser’ V8 version uses a twin-turbo 4.0-litre engine that produces 507bhp – or 528bhp in the uprated GT S model. This is enough to propel the Continental from 0-62 mph in 4.6 seconds, or just 4.3 for the S.

The 6.0-litre W12 engine seems rather like overkill, but for many Bentley devotees only the biggest will do. And with a minimum of 575bhp, the W12 certainly impresses with its numbers. The regular Continental GT will accelerate from 0-62mph in the same 4.3 seconds as the V8 ‘S’, but with its additional cylinders making for extra smoothness and a near-silent passenger compartment. Top speed, if you’ve somewhere legal to exploit it, is 198mph.

Leader of the pack, though, is the Supersports. It has uses the ultimate evolution of the 6.0-litre W12, with redesigned intake, exhaust and turbocharging systems, as well as stronger engine internals. Why is this necessary? 700bhp. This is a figure that wouldn’t disgrace a Formula One car and takes a very serious engine to achieve. The result of all this heavyweight engineering is 0-62mph in just 3.5 seconds and a spectacular 7.2-second sprint to 100mph.

More than that, it’s the way the Supersports instantly reacts to accelerator inputs and just goes that impresses the most. Overtaking maneuvers are dismissed in an instant. The 209mph top speed isn’t really relevant, but hints at near-bottomless reserves of power.