"Sharp to look at and even better to drive, the Bentley Continental GTC is a great British grand tourer." 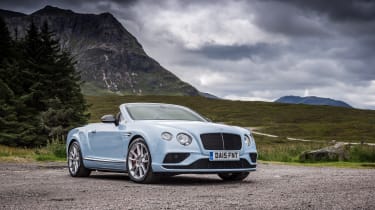 If you're looking for a super fast, super luxury grand tourer that offers wind-in-the-hair thrills with an iconic badge on the nose, the Bentley Continental GTC is the answer. It might cost you upwards of £150,000 - with a few choice options it's not hard to spend more than £200,000 on the top-spec GTC Speed - but few cars offer this much performance and image.

Although the huge 6.0-litre W12 engine is still available, most buyers opt for one of the turbocharged 4.0-litre V8 engines. That's because they're barely any slower and Bentley claims as much as 26mpg is possible. In a car that weighs more than two tonnes, that's pretty good going. Of course, there will always be those looking for the ultimate, which in this case is the 203mph Continental GTC Speed - the world’s fastest four-seat convertible.

Although this is effectively the second generation of Continental GTC, it still says true to the original's sleek, handsome styling. It's reasonably spacious inside, although those two rear seats are really only suitable for kids, or adults travelling very short journeys and the boot is reasonably large by the standards of cars like this.

Fuel and servicing costs are likely to be very high

The 4.0-litre V8 engines might be more fuel-efficient than the older 6.0-litre W12 engines in the range, but don't think any of them will be cheap to run. Bentley says the V8 models can cover around 26mpg, but low-20s is really as much as you can expect.

Don't expect servicing to be cheap either, as the Bentley's high-performance engines and gearbox need careful attention on a relatively regular basis.

Big Bentley offers a thrilling drive for such a heavy car

Whichever version of the Continental GTC you choose, performance is exceptional despite weighing more than the coupe. The 'slowest' model is the Continental GTC V8 which takes 5.0 seconds to accelerate from 0-62mph and won't run out of puff until 187mph. And it makes a wonderful noise while it's doing it. Even though it's the cheapest model, that kind of performance puts it at the top table.

Even so, if you want more, there's the Continental GTC V8 S which sees power increased from 507bhp to 528bhp and cuts the 0-62mph time to 4.7 seconds while stretching the top speed to 191mph. But it's the suspension tweaks that really sets the car apart, making it even more fun to drive at speed. It cost you another £10,000, but it's really worth the extra.

Against this kind of performance, the W12 models are harder to justify. The standard GTC W12 only marginally betters the V8 S' performance, but with bigger fuel bills, a larger price tag and a soundtrack that's not quite as evocative as that provided by the V8 it's difficult to see why you'd choose it. That's not something you could say about the GTC Speed, with its tyre-shredding 635bhp, 4.4 second 0-62mph time and 203mph top speed.

Whichever model you choose, the steering is accurate and there are four distinct driving ‘modes’ that allow you to tune the suspension between comfort or sharp handling. Even so, it's a big car and can feel slightly cumbersome on narrow country lanes. There's masses of grip provided by the car's huge tyres and four-wheel drive setup.

Adjustable suspension can be tuned to offer soft but sharp ride

Like most high-end cars, you can adjust the Continental GTC's suspension by selecting one of four driving modes. In its most comfortable setting, it offers a magic carpet ride, gliding over broken road surfaces, yet still feeling sporty to drive. In absolute terms, the Continental GT coupe is slightly more comfortable, but not by enough for it to be a deal-breaker.

There's very little road noise, and with the roof up, hardly any wind noise either – thanks to the roof's triple-layer construction and impressive sound insulation. What's more, the steady and even power delivery from both the V8 and W12 engine make this car very easy to drive. The eight-speed automatic gearbox changes gear very smoothly and quickly, and makes the most of the Bentley’s bags of power – available at any speed.

As you'd expect from a Bentley, the interior is very luxurious. Go for the GTC Speed and you get the Mulliner pack as standard, which includes hand-stitched quilted leather seats. But even if you don't, you'll still enjoy plenty of wood trim, chrome buttons, thick pile carpets and a Breitling clock set into the dash. As you'd expect from a £150,000-plus car, it wants for very little when it comes to standard equipment.

Despite its billing as a grand tourer, you'll have to travel light if you're planning a cross-continental jaunt. The boot measures just 235 litres - less space than you'd find in a Ford Fiesta - but it's still bigger than the boot you'd find in a Aston Martin Vantage or Mercedes-AMG GT. Unlike those cars, you get a pair of rear seats, although in reality they're only suitable for kids - or additional luggage.

As a two-seater, there are few better convertibles to travel long distances in. The seats adjust in many different ways, the interior is largely free from wind buffeting at speed and there's plenty of storage space in the dashboard and door pockets.

If you regularly plan to travel on unfamiliar roads, the latest cars have a new Google Maps-based satellite navigation system that offers breathtaking accuracy – though the sheer size of it makes it more suited to long motorway runs, than narrow urban backstreets.

Bentley's engines are developed in-house, with help from the Volkswagen group and parent company Audi. They have been widely used and are regarded as extremely reliable. The hand-built Continental GTC is finished to the highest standards, so there are no complaints over quality – with particular focus on top-notch materials and sumptuous luxury. With it's robust, aluminium bodywork plenty of airbags and four-wheel drive, safety is reckoned to be first rate as well.

Expensive but exceptionally well made

There’s no way of describing a car like the Bentley Continental GTC as good value for money. Even the entry-level V8 costs as much as a small house, and by ticking a few boxes on the option list, can send list prices spiralling. However, this side of a Rolls-Royce Phantom, very little comes close for interior build quality and first-rate materials; the sense of occasion when sitting behind the wheel undeniable.

The GTC Speed model is almost £20k more than the standard GTC W12 but for that you get the extra power, sporty suspension, beautiful hand-stitched quilted leather, 21-inch alloy wheels and a special body kit. Technology options like a WiFi hotspot that connects to your movile devices can be fitted too.

Used values are relatively strong, but the first-generation car has been around in the UK since 2004, so there are plenty of used examples for sale on the second hand market. Servicing is expensive, as are day-to-day running costs – but if you can afford the list price, it’s unlikely that keeping one on the road will be too much of a concern. 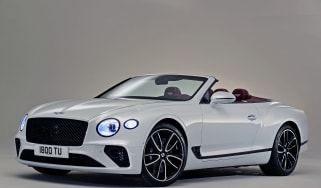