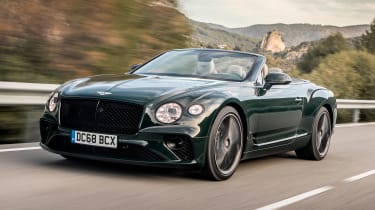 We've already been impressed by the Bentley Continental GT coupe, and the charms of the GT Convertible mean we predict it's destined to be a classic in future years. Today, though, even in the rarefied world of £200,000 drop-tops, the Bentley finds itself up against some stiff competition, including the Ferrari Portofino and Aston Martin DB11 Volante.

All three have a distinct character, with the Ferrari sounding much more raucous next to the Bentley's relatively subtle burble. The W12 engine in the Bentley has a woofly, crackly soundtrack that can be rather quiet in the coupe but it's possible to enjoy it in finer detail when the fabric roof is stowed in the convertible, which takes just 19 seconds.

The less expensive V8 version of the Continental, meanwhile, sounds fantastic in coupe form and the option to enjoy the sound even more fully by putting the roof down is one you'll want to take advantage of whenever possible. Even at speed with the top down, carefully considered aerodynamics, heated neck warmers and a wind deflector mean it never gets uncomfortable inside for the car’s occupants. Air suspension isolates occupants from the road beneath them, only shuddering the open-top structure when absorbing the worst potholes.

With the top back up, Bentley is keen to point out that refinement while moving is on a par with the outgoing Continental GT coupe. That's an impressive feat, and one which should allow occupants to enjoy the beautiful interior and thumping stereos to their fullest. The quality of craftsmanship of every switch, wooden veneer and leather covering is what really separates the Continental GT Convertible from its rivals. 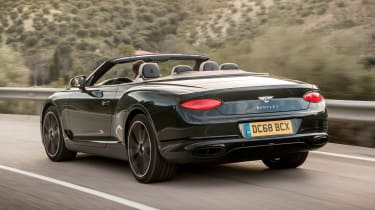 The trade-off for this opulence is weight, because the Bentley is as heavy as most luxury SUVs. It is at least less hampered by this mass than the previous model, thanks to an advanced chassis shared with the Porsche Panamera. This features active suspension that can adjust how each wheel responds in a fraction of a second, firming up to minimise body lean in corners but softening to soak up bumps on the motorway. The car is more fun too, carving through corners with precision and powering from 0-62mph in 3.8 seconds in flagship W12 form.

With 542bhp, the 4.0-litre twin-turbo V8 is hardly a slouch, as verified by its 198mph top speed. Its 770Nm of torque from just 2,000rpm is even more telling, providing a flexible and muscular driving experience. The soundtrack is glorious too, with a rich burble from the exhausts and crackles when you back off the throttle. With almost the same straight-line performance, better handling and a more characterful sound, we'd happily save the £10,000 extra needed to buy the W12.

Despite fuel-saving tech, both W12 and V8 petrol engines are thirsty

Fitted with either a 6.0-litre or 4.0-litre turbocharged petrol engine and weighing almost two-and-a-half tonnes, the Bentley Continental GT Convertible is about as far removed from a 'green' car as it's possible to get. There's a surprising amount of economy-focused technology fitted in order to make the car cleaner but the mpg figures are still low and CO2 emissions remain high. 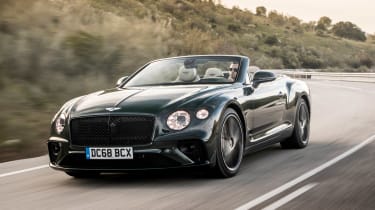 Stop-start technology cuts the engine when stopped in traffic and when slowing to a stop, while the Bentley can also 'coast' when you ease off the throttle at higher speeds. During gentle driving, Bentley's Variable Displacement can even shut down half the engine, turning the W12 into a six-cylinder and the V8 into a four-cylinder temporarily and imperceptibly. Further efficiency has been won by fitting an advanced new four-wheel drive system and dual-clutch eight-speed automatic gearbox. A massive fuel tank also means you don’t have to stop for fuel as often as you might think, despite the car’s thirst.

Even with all these measures, the W12 returns fuel economy of 19.1mpg and CO2 emissions of 336g/km, meaning it's comfortably in the highest 37% Benefit-in-Kind (BiK) band for business users. Opting for the V8 version improves these figures marginally to 23.3mpg and 260g/km of CO2. Road tax for both models costs £150 a year, but the high purchase price brings an extra tariff of £325 the first five times you renew. Other running costs to consider include group 50 insurance, an annual Bentley service and the cost of replacing some of the most expensive tyres and brakes fitted to any car.

Bentley's philosophy has long been to provide drivers with a sense of effortless and endless power reserves, so its W12 engine produces 626bhp and a wall of torque (900Nm in fact) all the way from 1,350rpm to 4,500rpm. It gets the car from 0-60mph in 3.7 seconds and powers it on to 207mph. There's no need to thrash the engine; a flex of your foot sees the Continental GT Convertible leave virtually everything else on the road in its wake.

The less powerful turbocharged 4.0-litre engine in the V8 model still produces 542bhp, and gets the car from 0-60mph in 4.0 seconds and on to a top speed of 198mph. The straight-line speed difference between the V8 and W12 is minimal, and in corners the lighter V8 model actually feels more agile. While both cars sound incredible when pushed, the deep, thunderous rumble of the V8, particularly in Sport mode, is intoxicating. The W12 may be the flagship version of the Continental but the V8 is the better car from a driving point of view. 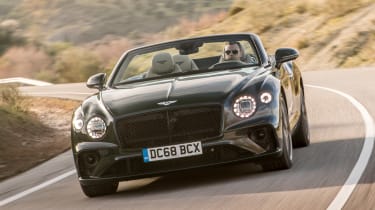 Both models benefit from the Continental's new chassis (shared with the Porsche Panamera), which does a great job of masking the Bentley's 2.5-tonne weight. Clever active suspension adjusts for each corner to reduce body lean and massive brakes are always ready to scrub off speed when called upon. The new gearbox is a delight too, providing quick changes, but without any jolts that would spoil the ‘Bentley experience’.

A lot of care has clearly been taken to get the steering just right too. It's light enough to make this big bruiser feel nimble but consistent and precise in its responses. As mentioned, the exhaust that's quiet in Comfort mode comes alive in Sport, with bass-rich and rounded notes quickly overtaken by the sound of the turbos.

Endless options, acres of wood and soft leather all makes for an incredibly comfortable interior

While the Continental GT Convertible's suspension is impressively smooth in Comfort, the ride can still become slightly uncouth in Sport on the bumpiest roads, and we suspect blame lies with the 21- and 22-inch alloy wheels. Removing the Coupe's metal roof also means the convertible can flex slightly, but you'll only feel it through the steering wheel very occasionally. With warm air blowing on the nape of your neck and the heated seats switched on, niggles fade away, and there's not much in the way of wind turbulence, even at speed.

Bentley is particularly proud of the refinement of its latest convertible, claiming that with the roof up, it's as quiet inside as the previous-generation Continental GT coupe. Meanwhile, the fit, finish and sheer luxury of the interior is just as impressive as in the coupe. You'll struggle to find much plastic, as just about every surface is covered in top-end leather, wooden veneer or metal. More than 10 square metres of sustainably sourced wood is used in every car. 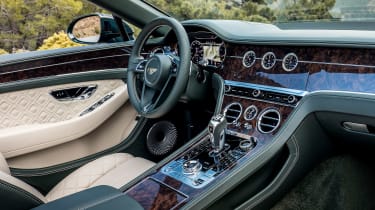 Technology is taken care of by the latest infotainment system from the Volkswagen Group stable, which is shared with the Audi A8 but given a Bentley makeover. With a 12.3-inch screen, navigation and Apple CarPlay and Android Auto, the Continental has all the latest features. And, for those times when you just want to switch off from the world, the Bentley Rotating Display can replace the infotainment screen with a compass, a chronometer and a temperature gauge, or a blank piece of dashboard for a minimalist look.

Every aspect of the interior can be customised, but two packs offered at launch bundle some of the most popular options. City Specification adds convenience features like a hands-free powered boot, autonomous emergency braking and a 360-degree camera view. Touring Specification introduces adaptive cruise control, a heads-up display, night vision and lane assist, while Mulliner Driving Specification adds 22-inch forged wheels and a series of interior upgrades.

The Continental might be designed to for long cruises abroad, but you may need to send luggage ahead

The driver and front passenger are certainly well catered for, with seats that adjust in every direction fitted with neck warmers for driving with the top down on cool days. However, the back seats are only really suited to children, and you'll need to go without the wind deflector to be able to use them.

The convertible's 235-litre boot is also smaller than that of most superminis, so if you're planning on using the drop-top Bentley to cross continents, you'll most likely resort to putting some extra soft bags or airline suitcases on those back seats. It's slightly bigger than the 224-litre boot found in the Aston Martin DB11 Volante but the Ferrari Portofino trumps both with 292 litres of luggage space.

Two adults can just about fit in the rear seats for shorter trips, but legroom is tight.

The Bentley is supremely well built, but every bit of safety kit should be standard at this price

While most manufacturers boast about how many of its cars can roll off the line every hour, Bentley is more likely to mention the many hours it takes for a Continental GT Convertible to be crafted. This lavish attention to detail is one of the reasons a Bentley costs so much, and why every car is rigorously inspected for any defects before reaching the hands of customers. 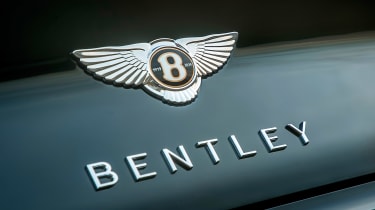 It's also reassuring that many of the hidden components of the Continental GT are shared with models like the Porsche Panamera and Audi A8, so have been thoroughly tried and tested.

Euro NCAP doesn't test low volume models like this, but the Continental GT appears to be built with safety as a top consideration, to the same standards as other flagship Volkswagen Group models. It's a shame, then, that customers are asked to fork out for the City Specification to gain safety systems like autonomous emergency braking, pedestrian warnings and traffic-sign recognition, which are now being fitted as standard to some hatchbacks. 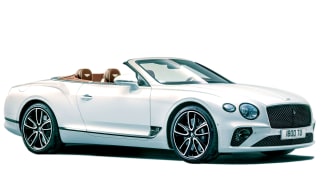