BMW has a well-deserved reputation for making quality products, and while the BMW 1 Series may be the most affordable model in its range, there’s no evidence of cost-cutting. Every inch of the car feels solid and we’d expect it to be very reliable, while it’s also equipped with the latest safety technology and has been highly rated for protecting its occupants in a crash.

The BMW 1 Series was rated above average for reliability in our 2017 Driver Power owner satisfaction survey of cars currently on sale in the UK. Of the owners who responded, 16.5% reported experiencing a problem with their car at least once.

The one category that owners were least happy with was that of running costs. Though fuel consumption of some models is impressively low, some owners of older diesel BMWs have faced big repair bills when parts such as turbochargers, injectors or exhaust filters have failed out of warranty. 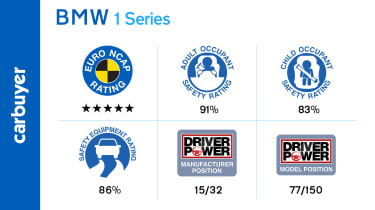 Pedestrian protection was good, too – the 1 Series scored 63% here, putting it close to the VW Golf and Audi A3.

You get a raft of safety technology fitted as standard, including traction control, multiple airbags, ISOFIX child-seat mounts, anti-lock brakes and electronic stability control. You can also pick from a number of safety-related optional extras, such as lane-departure warning and automatic braking, which is able to detect stationary traffic in front of you and automatically brake to prevent a low-speed collision.