Buying a sportier car usually means having to sacrifice some practicality, but the second-generation BMW 1 Series has a lot more space inside than before. It still doesn’t look great next to practicality-focused rivals such as the VW Golf, however.

Only choose the three-door version if carrying passengers in the back is not a big priority, as clambering into the back seats through the narrow gap is ungainly at the best of times. Plus, it can be hard to open the long doors if you’re stuck in a row of tight parking spaces. In both body styles the rear-drive layout means there’s a tall transmission tunnel in the middle of the rear floor, so the middle seat in the back is only really suitable for kids.

Another issue for families is that in the five-door the wheelarches intrudes into the rear seat space, which means they can get in the way if you’re fitting a child seat. The rear side panels extend further back than the doors themselves, making it hard to open the doors wide if you’re in a tight parking space. 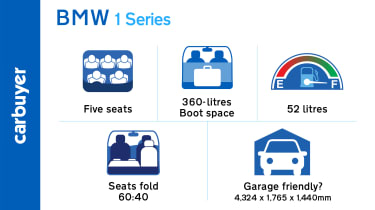 Once they’re settled in the back, rear passengers will notice a decent amount of headroom, and although there isn’t much space to stretch out, the 1 Series is easier to get comfortable in than the Mercedes A-Class or the Lexus CT 200h.

Up front, the driver and front-seat passenger have plenty of space, and the wide door pockets can swallow up to three drinks bottles. There are also two cup-holders in the centre console and even more space in the deep glovebox, as well as the dividing armrest – as long as you’ve paid the extra to have it as a cost option.

The BMW 1 Series’ boot can carry 360 litres of luggage with the rear seats in place. Drop them down and they create a virtually flat loading area that will swallow an impressive 1,200 litres. A low lip means you might be surprised by what you can lift into the back, with larger suitcases and bikes posing no problem at all, though the boot opening doesn't seem as wide as some of its rivals. Still, outright space is fractionally more than you'll find in a Mercedes A-Class or Lexus CT, but not by enough to be a deal-breaker. 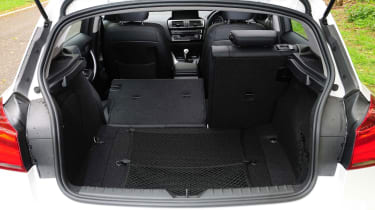 As standard, the 1 Series comes with a 60:40 split between the rear seats, but you have the option to specify a through-loading 20:40:20 split for carrying long and narrow awkward items such as skis or flat-pack furniture. For even more practicality, there’s a full-length luggage separator available. An Extended Storage Pack adds more 12v sockets, more cubbies and nets in the back seats, plus another net in the boot for securing loose items of shopping. It’s an option box that’s worth ticking, but it's also a shame that such a useful piece of equipment isn’t standard.

Most buyers looking to tow a trailer or caravan are unlikely to choose a sporty, rear-wheel-drive hatchback, but those that do will discover a reasonable towing capacity of 1,200kg to 1,500kg with a braked trailer – depending on which engine you choose. Just ensure you don’t buy the 116d ED Plus or BMW M140i if you plan on towing, as they aren’t permitted to do so.