The BMW 1 Series offers super-efficient diesels that can be free to tax, appealing to business drivers, but excellent petrols are worth looking at, particularly for around-town drivers

The cheaper models in the 1 Series range are the most affordable BMWs to buy and own. They offer competitive fuel economy and CO2 emissions figures thanks to the 1 Series’ impressive engine line-up, and even though the car is a little more expensive to buy than some competitors, it’ll hold its value well on the used market. That means private buyers can expect a higher percentage of their money back when the time comes to sell. 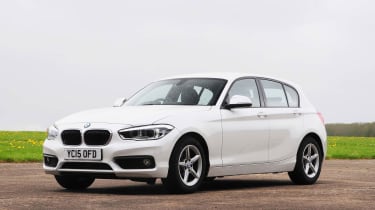 It’s worth noting, however, that if you go for the 1 Series, its rear-wheel drive makes fitting winter tyres a particularly good idea once the temperatures start to drop. Although buying a second set of tyres is an added expense that’s less of a necessity on front-wheel-drive cars – and storing a spare set of wheels can be a pain – it’s definitely worth it for the safety of improved grip in wintry conditions. Alternatively you can opt for a 1 Series with xDrive four-wheel drive, but this makes the car more expensive to buy and run.

For some 1 Series models, CO2 emissions can differ slightly depending on the wheels that are fitted to the car, so check the exact figures before you buy. After the first year's CO2-based road tax (generally included in the on-the-road price), all BMW 1 Series cost £140 a year to tax. Those with a list price (including options) of more than £40,000 are liable for an additional surcharge of £310 a year in years two to six, bringing the annual bill to £450 during that period. 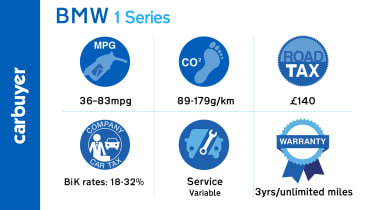 Every model in the 1 Series range features stop-start engine technology as standard so nearly all of the petrol models return close to 40mpg on average and sit well below the 140g/km CO2 emissions mark. The automatic gearbox is almost as efficient as the six-speed manual, and in some cases it’s even more frugal, depending on which engine you get. The smallest petrol, the three-cylinder found in the 118i, produces up to 38.7mpg.

Even the top-of-the-range M140i hot hatchback still manages to return an average of 32.5mpg thanks to improvements in 2016, when it replaced the M135i. Those are extremely impressive figures for a car with 335bhp that’s almost as fast as a Porsche 718 Boxster S.

For long-distance drivers, the extra power offered by the 118d and 120d models might appeal. But even here, BMW claims more than 50mpg and emissions that mean these models fall in the 28% BiK band for 2019/20, which includes a 4% surcharge on diesel.

Choose a petrol 1 Series and you’ll have a car that's very quiet when driving around town, but we’d definitely recommend sticking with the economical diesel models for covering seriously high miles, if only for their better motorway overtaking and improved cruising economy.

The diesel 1 Series models can sound a bit gruff sometimes but once you’re cruising their noise becomes almost undetectable.

The fuel-sipping 116d sits in insurance group 15, which is the lowest by some margin. Choosing the 118d or 120d sees this increase to between 19 and 25 depending on specification, while petrol engines sit in groups 18 to 28. The BMW M140i is most expensive to insure in group 37 out of 50. While entry-level versions should prove cost effective to insure, the rear-wheel-drive layout and exclusive badge still mean you're likely to pay more for your premium than with cars such as the Ford Focus and SEAT Leon.

BMW offers a three-year, unlimited-mileage warranty on all 1 Series. You also have the option to extend the manufacturer’s warranty up to a maximum of five years at extra cost. After that, you can purchase an aftermarket warranty to ensure continued protection, but this can start to become quite expensive relative to the value of the car as it gets older.

Thanks to a variety of fixed-price servicing deals, the BMW 1 Series is actually cheaper to run than you might expect. The service schedule is variable – it’s largely dependent on how you drive and the number of miles you cover, rather than a period of time, so there’s no need to visit the dealer unless you have to. However, once the maintenance plan runs out, you might need to stomach more expensive bills.