Thanks to lower, sportier suspension, the X4 handles better than the X3. It also has plenty of grip, thanks to the xDrive four-wheel-drive system (which is fitted to all models as standard). Accurate steering makes the car feel impressively agile, too. The same goes for body lean – despite the X4's SUV dimensions, it remains relatively flat and stable in corners, making it more fun to drive than you'd expect for a car of this size.

The top-of-the-range M Sport models have firmer suspension for a sportier drive at the expense of some degree of ride comfort. All X4s are available with adjustable suspension as an option. This system allows you to change the settings to favour comfort or handling depending on how you fancy driving.

Our only major criticism is of the brakes. While the X4 is good fun on a windy road in almost all other aspects, the brakes begin to struggle when you ask them to slow down such a big car repeatedly – they could do with being more powerful. 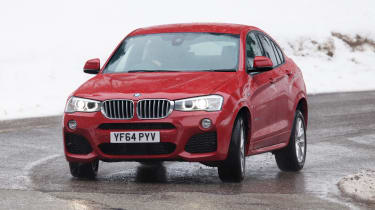 Even the 187bhp 2.0-litre turbodiesel in the X4 20d will get the car from 0-62mph in eight seconds – still fast for a car this size. The X4 20d accounts for the majority of X4 sales, but we'd recommend going for the X4 30d if you can afford it, as it makes a nicer noise than the X4 20d and is more refined at speed, too.

Another advantage is that the 30d's engine is a great match with the standard eight-speed automatic transmission. The beauty of this is that it shifts quickly in both automatic and manual modes without sacrificing smoothness.

The X4 20d is the only model offered with a six-speed manual gearbox, although you can choose the eight-speed automatic gearbox in this model at extra cost.