Whatever you think of the design of the outside of the X4, it’s harder to argue about the quality of the interior. It has a similar cabin to the X3, which now looks classy rather than cutting-edge.

It’s as well built and smartly finished as you'd expect from BMW, but it's a shame some of the more futuristic elements seen in the hybrid BMW i8 coupe haven't been included, as these would make the X4’s cabin feel more exciting. 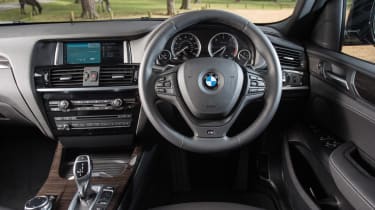 This does, however, mean that the X4 has an uncluttered layout inside, plus BMW’s excellent iDrive control system. Sat nav is standard across the range – and it’s one of the best systems on the market.

The minimal labelling on some of the buttons might take a bit of getting used to, but the quality of the materials is first class, with soft-touch plastics, soft leather and classy metal trim throughout.

There are three trim levels to choose from when buying a BMW X4: entry-level SE, mid-range xLine and range-topping M Sport. xLine cars cost £1,500 more than SE models, while the M Sport is £3,000 extra. In truth, the ‘basic’ SE is actually very well equipped – which is just as well, given the X4’s high price.

The X4 xLine gets an alternative alloy wheel design, chrome touches on the bodywork and sports seats. X4 30d models in xLine specification also get metallic paint, sport automatic transmission and Drive Performance Control, which is a system that allows you to change the car’s responses depending on your driving style.