BMW X4 reliability likely to be good, but no official safety rating yet

BMW has a good reputation for building reliable cars and the X3 on which the X4 is based achieved top marks when it was crash-tested. Overall, we’d expect the X4 to be safe and dependable in the long run.

The X4 is a relatively recent car, but it’s based on the X3, so we’d expect it to perform as well as its sister model when it comes to reliability. All of these cars’ mechanical parts are identical, so the X4 is well tried and tested, while its on-board technology such as the standard sat nav has proved reliable, too. 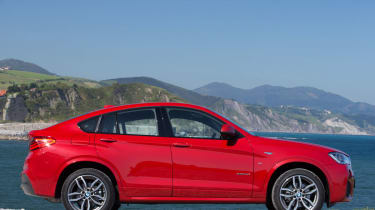 It’s a slight worry that neither model featured in our 2017 Driver Power owner satisfaction survey of the top 75 cars, but BMW performed well as a brand. Finishing in ninth place out of 27 manufacturers, BMW beat rivals Audi and Land Rover. Engines were a real highlight, along with the quality of its infotainment systems. Overall, 12.4% of BMW owners reported a fault within the first year of ownership.

The X3 has a five-star Euro NCAP rating, and the X4 should be no different as it features the same range of safety equipment, including tyre-pressure monitoring and six airbags.