As the the X4 range is only available with diesel engines in the UK, fuel economy is pretty reasonable considering their size and performance. Insurance costs are quite high due to the X4’s speed and the BMW badge on the bonnet, but the manufacturer does at least offer fixed-price servicing to take some of the sting out of ongoing maintenance costs. 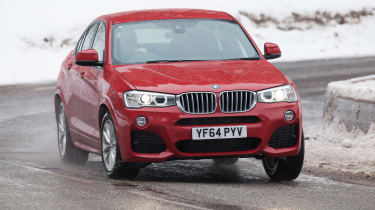 BMW claims the top-of-the-range X4 xDrive35d model is capable of 47.1mpg fuel economy and has CO2 emissions of 157g/km – pretty impressive figures for a 309bhp car. Rivals such as the Porsche Macan S Diesel and Range Rover Velar are less powerful than the X4 35d, but also less economical.

Bear in mind that different alloy wheel sizes can alter the CO2 emissions, so double check this before you buy, just in case it places the car in a more expensive company-car tax band.

The BMW X4 20d falls into insurance group 31. Moving up to the more powerful 30d means the X4 lands in group 40, while the power on offer in the 35d puts it in group 43. In comparison, the Range Rover Velar is in group 44, while a Porsche Macan S Diesel sits in group 39.

BMW offers a fixed-price servicing scheme for the X4 called Service Inclusive. It costs around £500 and covers the car for five years or 50,000 miles, whichever comes first. You can also choose Service Inclusive Plus, which costs £1,500 and covers servicing plus the cost of replacing wear-and-tear items such as brake pads, brake discs and windscreen-wiper blade runners.

BMW offers a three-year/unlimited-mileage warranty on its new cars and if you have the car serviced by a BMW dealer during that time you can extend the duration of the warranty at extra cost.