The Ford Galaxy was voted Best MPV in our Driver Power 2014 owner satisfaction survey. That represented a big improvement for a car that barely made the top 100 in the 2013 edition. The Galaxy was awarded five stars when it was crash-tested in 2006, however the Euro NCAP test regime has become much tougher since then, so you can expect the Volkswagen Sharan and SEAT Alhambra – both of which were tested in 2010 – to be even safer.

The results of our Driver Power 2014 owner satisfaction survey paint the Ford Galaxy in a very good light – the car leapt 43 places from 2013 to finish 46th out of 150 cars. That meant it was 2014’s highest-rated MPV and owners praised its versatility. It picked up an eighth-place finish (out of 150 cars) for practicality, too. The Ford also scored well for ride quality (25th), while a 43rd-place finish for handling is impressive for a big MPV. There were still some areas of concern, though: the Galaxy finished way back in 128th place for reliability and 127th for build quality. 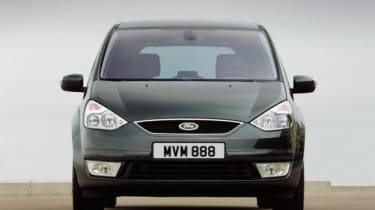 When Euro NCAP tested the Galaxy for crash safety, it was awarded the full five stars. It comes with seven airbags (including one for the driver’s knees) and electronic stability control, while standard ISOFIX mounts in the rear provide safe anchoring points for child seats.

It’s worth noting, however, that the Galaxy was crash-tested in 2006 and therefore isn’t going to be as safe as an MPV that scored five stars in a more up-to-date evaluation. Extra equipment such as active cruise control (which can match the speed of the car in front to maintaining a safe distance) and a blind-spot warning system make the Galaxy even safer, although neither of these features are available on the entry-level Zetec model.