"The Ford Galaxy is massive, luxurious and better value than a 4x4. It also gets the balance between driving enjoyment and ride comfort spot-on."

The Ford Galaxy is one of the best people carriers you can buy: a genuine seven-seater with masses of seating configurations (32 to be precise) and a van-like load area when the seats are folded away. It's also fun to drive, being based on the same platform as the sportier but less practical Ford S-MAX. In fact, it's so good that it trumps the highly regarded Volkswagen Sharan and its sister car, the SEAT Alhambra.

That pair makes up ground by having sliding rear doors that give easier access to their roomy interiors. However, the resulting door runners along their sides are fairly unsightly. The Galaxy's conventional doors help to make it feel more stylish and upmarket.

So far, so good, then, but there's a fly in the Galaxy's ointment in the shape of an all-new model coming in summer 2015. It'll have Ford’s new front grille, its new SYNC voice-recognition technology, a remotely controlled third row of seats and a more spacious cabin, while being powered by a new range of more efficient engines. Counting in the current Galaxy's favour is the fact that it's still an impressive MPV and as the new model approaches, the deals offered on remaining old examples should be very good. 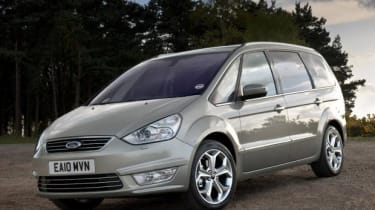 Buyers can choose from a range of petrol and diesel engines. Our favourite is the 138bhp 2.0-litre diesel, which offers a good balance of performance and fuel economy. It accelerates from 0-62mph in 10.6 seconds yet manages to return 53.3mpg and has an annual road tax bill of £180. It also generates a lot of pulling power for easier overtakes when fully laden. In fact, because the Galaxy is a heavy, bulky vehicle, the diesel engines really are the ones to choose.

The petrols, although quieter and smoother, just aren't powerful enough to pull a loaded Galaxy without badly affecting their fuel economy. They're cheaper to buy, however, so could be worth considering if you do low annual mileage.

Visibility from the high-riding Galaxy is very good. Surprisingly for such a tall vehicle, it doesn't lean too much in corners. Instead, it feels quite comfortable and composed, while the steering is pleasantly quick and direct.

Trim levels are the familiar basic Zetec, mid-range Titanium and top-spec Titanium X. All have Ford's excellent Quickclear windscreen (which can de-ice itself at the flick of a switch), front and rear parking sensors (essential for such a big vehicle) and air-conditioning. Titanium X spoils you with luxuries including leather and wood-effect trim, but our pick is Titanium for its more useful extras, among them cruise control and automatic headlights.

It's a mixed picture for reliability, but owners seem generally satisfied with their Galaxys. The model scored the full five stars in Euro NCAP crash tests and is equipped with seven airbags, electronic stability control and ISOFIX child-seat mounts.