Kia Sportage has road manners that are a big improvement over Kias of old, but still trails rivals for driving satisfaction

First off, if performance is a priority, then your best bet is to opt for a Ford Kuga or Mazda CX-5 – both of which offer a sporty driving experience and are more fun to take down a twisty road. The Sportage has a softer, more comfortable suspension set-up, although this can make it a bit bouncy on rough UK roads. 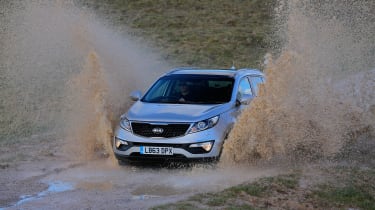 The Kia Sportage is an average performer for the crossover class. The basic 1.6-litre petrol engine will do 0-62mph in 10.7 seconds, but feels quite hard-pushed at high speeds. It’s best avoided if you spend a lot of time on the motorway.

The 1.7-litre diesel is slower than the petrol on paper, but actually seems faster on the road due to its characteristics – it feels more powerful from lower speeds, so it’s much better at safe overtaking. 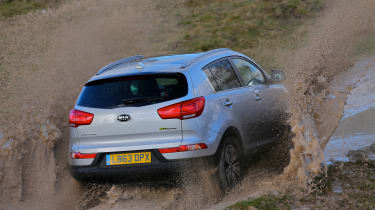 The 2.0-litre diesels are more impressive still, offering decent performance and low running costs. The 134bhp version goes from 0-62mph in 11 seconds, while the 181bhp engine takes 9.5 seconds to do the same. They’re only available with four-wheel drive, but despite improved performance, we’d still recommend the 1.7-litre engine, because it’s several thousand pounds cheaper to buy and costs less to run.

The entry-level 1.6-litre petrol engine comes with a six-speed manual only, so if your budget only stretches this far, then you’ll have to make do. All the diesel engines get a six-speed manual, but the 2.0-litre versions can be specified with an automatic. But we recommend the manual: it suits the car better, is much smoother around town and far cheaper to run.