Fuel economy and CO2 emissions aren’t a match for rivals, but Kia Sportage servicing costs will be low

Compared to your average family hatchback, crossovers aren’t normally known for their rock-bottom running costs – but the Kia Sportage is surprisingly efficient. The 1.7-litre CRDi diesel will do more than 50mpg, which is pretty respectable given the bulky shape and heavier body.

Unsurprisingly, the diesel engines are the best if you want to keep running costs to a minimum. The 1.7-litre CRDi returns a claimed 55.4mpg.

The larger, faster and more powerful 2.0-litre CRDi diesel engine is available in two versions, but both fuel consumption and CO2 emissions vary depending on the size of alloy wheels fitted and whether the car has an automatic or manual gearbox. There’s a difference of over 10mpg between the most and least economical versions, and road tax costs range between £130 and £265 a year. 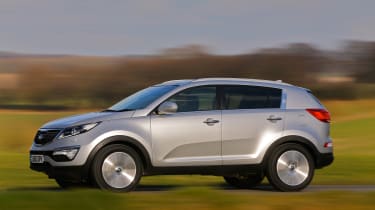 Running costs climb further for the more powerful 181bhp version, but it’s still competitive given the car is four-wheel drive. Road tax for the manual version will cost £180 a year.

It’s worth noting that the faster and more powerful Mazda CX-5 2.2-litre diesel is more efficient than any Sportage. The two-wheel-drive Mazda will return 61mpg thanks to some clever technology. Even with four-wheel drive, the Mazda will manage an impressive 54.3mpg.

The 1.6-litre petrol engine’s running costs aren’t far behind the diesels – and it’s worth considering if you spend a lot of time nipping around town or on short trips to the shops. The 1.6-litre GDi petrol with two-wheel drive emits 149g/km (so road tax is £145) and will return 44.1mpg if you drive sensibly.

The petrol version of the Sportage could represent the bargain of the range for company-car drivers, thanks to a lower Benefit-in-Kind (BiK) rate, but bear in mind increased fuel bills could reverse those savings.

The Sportage is a solid investment for those looking to minimise their losses when the time comes to sell. Experts say the Sportage will retain about 54 per cent of its original price after three years and 36,000 miles. That compares favourably with the Nissan Qashqai (45 per cent) and Mazda CX-5 (46 per cent). 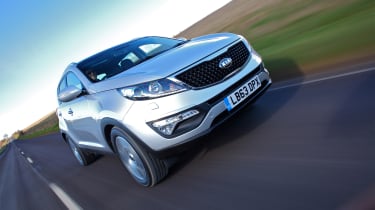 Kia Sportage insurance groups are on par with the competition. All models fall within groups 10-19. For comparison, Nissan Qashqai insurance starts at group 14, while the MINI Countryman is available with group 12 insurance on the basic model. However, it’s worth noting that the entry-level Dacia Duster is in group 6.

Like all brand-new Kias, the Sportage is covered by the company’s industry-leading seven-year/100,000-mile warranty. It’s transferrable between owners and protects you from any unwanted surprises or big bills for longer than any of its rivals. The Ford Kuga comes with a three-year warranty and the Hyundai ix35 is covered for unlimited miles for up to five years.

New Kia Sportage models can be ordered with the Kia Care-3 package, which covers the car’s first three services for a fixed price. The package costs £329, but buyers can extend the cover to five services for £609. A third policy is available for buyers who cover higher mileages.