The Kia Sportage has a large boot and the interior is spacious, but its rear window is small, making park sensors a must

Despite the fact that the Kia Sportage has relatively compact dimensions, it’s tall enough to provide plenty of space for people and luggage, making it a very practical car indeed.

The Sportage is slightly longer than a Nissan Qashqai, yet slightly narrower than a Ford Focus. The raised seating position may not be to all tastes, even though it does provide good visibility of the road ahead. One black mark against the big Kia is its narrow rear window, which can make judging distances when reversing tricky. Fortunately, rear parking sensors are fitted as standard on all models, with the exception of the entry-level 1.

The front seats are spacious and comfortable, and there’s even enough room for three adults to sit in the back. There’s lots of headroom, and – thanks to the lack of a transmission tunnel – loads of legroom, too. However, the Sportage’s bouncy ride might become tiring on a long motorway journey. 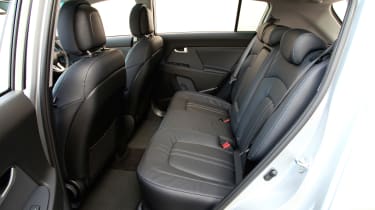 Upgrade to the Sportage 2 and you’ll add electrically folding door mirrors and reverse parking sensors, while 3 models get xenon headlights, an auto-dimming rear-view mirror and separate air-conditioning controls for the driver and passenger. Completing the range is the four-wheel-drive KX4 model, with parallel parking assistance, a seven-inch touchscreen sat nav and a reversing camera to help with tight manoeuvres.

Every Kia Sportage gets split-folding rear seats as standard, which boosts the car’s practicality and makes it easy to load bigger items into the decent-shaped boot. The boot holds 564 litres with the rear seats in place, which is more than either the Nissan Qashqai or the Skoda Yeti can manage, and there’s no load lip so it’s easy to load heavy or bulky items, too. This expands to 1,353 litres with the seats folded – a task that can be performed simply and easily with the pull of a lever inside the boot. 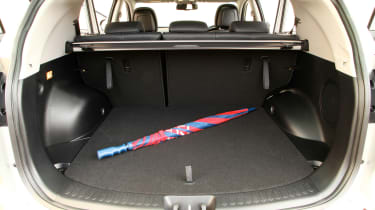 There’s also extra storage under the boot floor – useful for stashing valuables out of sight – as well as a decent-sized glove box, plenty of cubbies and some big door bins. If you go for one of the four-wheel-drive KX models, you get an easy-to-use 4x4 lock switch that makes the Sportage slightly more capable when you venture off the beaten track. A full-size spare wheel is provided on all models.

The 2.0-litre diesel Sportage has the best towing ability of the range. It’s capable of towing a 2,000kg braked trailer, but choosing an automatic gearbox cuts the capacity to 1,600kg. The 1.6 petrol and 1.7 diesel models can tow a braked trailer weighing up to 1,200kg.