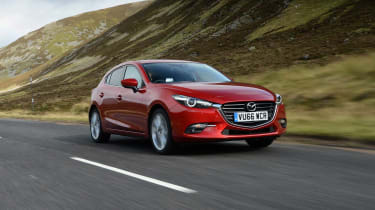 The Mazda3 is 100mm longer than a Ford Focus, which translates into more legroom in the back of the car, so tall adults should be able to get comfortable easily. There’s also plenty of space in the front seats, with decent adjustment for the seat and steering wheel.

Parking sensors are standard on the SE-L Nav model, along with rain-sensing wipers and automatic xenon headlamps.

While there isn’t as much space inside the Mazda3 as you’ll find in a Peugeot 308 or Nissan Pulsar, there’s still plenty of room for four adults. The rakish exterior design limits interior space, and the small rear windows make things feel claustrophobic in the back. 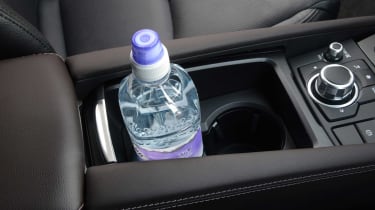 There are plenty of useful cubbyholes in the Mazda3, including cup-holders, a lidded central storage area and a decent-sized, air-conditioned glovebox. However, while the cabin is very practical, the Mazda3 lacks useful touches in the boot, such as shopping-bag hooks or a 12v power supply.

Parents will be pleased to hear that ISOFIX child-seat mounts are included, as well as a passenger airbag cut-off switch, which allows the use of a rear-facing baby seat in the front.

The Mazda’s 364-litre boot is 15 litres short of the Volkswagen Golf’s and is a little smaller than the Ford Focus' 375-litres. The Mazda’s hatchback boot lid leaves a wide opening for loading heavy items and the back seats also fold down flat. 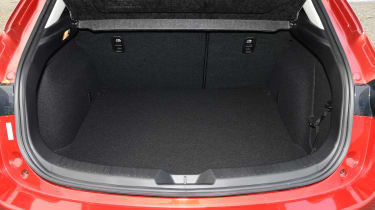 The boot does have a load lip, which makes it harder to slide heavy items in, but it should pose no problems when lifting in a buggy or a set of golf clubs. With the rear seats folded down, maximum capacity in the Mazda is 1,360 litres. Buyers can also choose the Mazda3 Fastback saloon, which has a 420-litre boot.

If you’re looking to tow on a regular basis, you’ll be better off with one of the powerful diesel models. The 2.0-litre petrol cars aren’t bad, but go for one of the 2.2-litre diesels and you’ll appreciate the surge of power from low speeds. They’ll tow a braked trailer weighing up to 1,500kg whereas all other models have a 1,300kg maximum.