There’s a choice of two diesel and three petrol engines when buying a Mercedes CLA. The entry-level CLA 180 petrol and CLA 200 diesel are very fuel-efficient, particularly if you pair them with an automatic gearbox. The 2.0-litre petrol models are quite powerful and also have four-wheel drive, which hurts their fuel economy.

Mercedes’ status as a ‘premium’ manufacturer means servicing and insurance are likely to be slightly more expensive than some models from less prestigious marques. However, the same will be true for rival cars made by manufacturers such as BMW and Audi, which a lot of buyers will consider to be its most obvious competitors options in this class.

The two diesel engines are the most efficient choices, so if you do a fair amount of long journeys and motorway driving, these are certainly the versions of the CLA to look at first. The CLA 220d is capable of 67mpg and emits 106g/km of CO2 for a 23% BiK company-car tax band. Go for the less powerful version of the same 2.1-litre engine in the CLA 200d with the optional automatic gearbox and emissions drop to 105g/km. With a six-speed manual gearbox, the 200d manages 67.3mpg, rising to 70.6mpg if you go for an automatic. 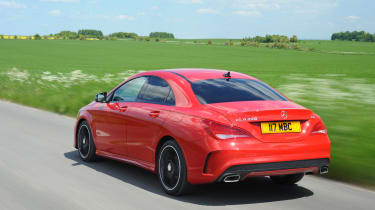 The 1.6-litre engine in the CLA 180 makes it the most frugal petrol model on offer. With the automatic gearbox, it can return up to 52.3mpg while emitting 124g/km of CO2, meaning it qualifies for the 23% BiK band. Fuel economy does slip slightly with the manual gearbox, while BiK increases to 24%.

The CLA 250 and hugely powerful CLA 45 AMG come with the same 2.0-litre petrol engine, but with different power outputs. The range-topping CLA 45 AMG can manage 40.9mpg at best and its CO2 emissions of 162g/km make it costly for company-car drivers, with a 31% BiK band. The CLA 250 sits between the CLA 45 and the CLA 180 when it comes to fuel economy.

It’s worth knowing that choosing larger alloy wheels can affect efficiency (in some cases pushing the car into a more expensive BiK company-car tax bracket), so check this before you make a decision on the exact specification of your car.

Stick to one of the ‘sensible’ models and your CLA will fall somewhere in the twenties insurance groups. The CLA 180 is in group 23, while the CLA 200d is in groups 22-25 and the petrol CLA 250 is in groups 32-34. If you’re smitten with the look of the car and want blistering pace to go with it, the AMG CLA 45 is the one to go for, but it’ll cost plenty more to insure, as it falls into group 45 – just five off the maximum.

Mercedes offers fixed-price service plans across its range, starting from £27 a month for two services over two years, or three services over three years. The same deal for the CLA 45 costs from around £35 a month.

Mercedes offers a three-year, unlimited-mileage warranty to its buyers, which matches the cover offered by its biggest rival, BMW. Although companies like Audi and Lexus offer the same length of warranty, they limit their cover to 60,000 miles, so Mercedes and BMW drivers are better off if they plan to do more than 20,000 miles a year on average.