As soon as you get into the driver’s seat of the Mercedes CLA, it's clear that the low-slung driving position has been designed to enhance the overall sporty feel of the car. This isn’t a problem, though, as there’s plenty of seat and steering-wheel adjustment, so almost anyone should be able to find a comfortable driving position.

The boot is a good size and part of the lengthy list of options is dedicated to making the CLA even more practical. The stowage package, which costs around £200, adds parcel nets in the cabin, storage boxes under the front seats and a sunglasses holder in the overhead panel. An optional rear armrest and ski hatch can be ordered for a similar price.

Overall, the CLA is a fairly practical car, with the only real problem being the swooping coupe roofline that eats into headroom for passengers in the back. 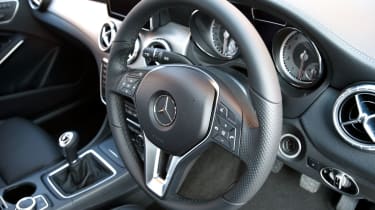 There's plenty of space in and around the centre of the Mercedes CLA's dashboard. That’s partly thanks to the electric parking brake, which frees up some room, and also because there are plenty of storage cubbies in the central console. The occupants of the driver’s and front passenger’s seat will find the car pretty spacious.

The CLA isn’t so easy on its rear occupants, though. The coupe roofline cuts into rear headroom and it's easy for taller passengers to bang their heads on the low door frame and then sit with their heads rubbing the roof lining.

The Mercedes CLA is technically a five-seater, but the seat in the middle of the rear bench is narrow and the wide transmission tunnel means there isn’t much room for feet, either. 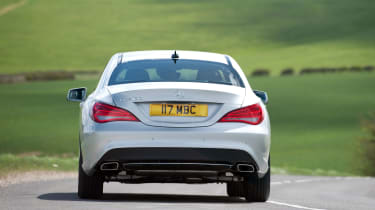 Boot space in the CLA stands at 470 litres – 130 litres more than the Mercedes A-Class on which the CLA is based – but while the boot opens to a decent height, the opening is narrow and awkward due to the sloping body shape. What's more, the lip of the boot is quite high, which causes problems when you’re trying to put heavy, cumbersome items into it. Still, there’s no denying there’s plenty of room, with the CLA easily trumping the 425 litres offered by the Audi A3 Saloon.

Mercedes offers a trailer coupling for the CLA for around £800 as an optional extra. The maximum braked-trailer towing weight for most models is quoted as 1,500kg, although the CLA 180 can only pull up to 1,200kg and it should be noted the CLA 45 model isn’t deemed suitable for towing a trailer of any weight.