Out on the open road, the CLA is competent without being razor-sharp or hugely rewarding to drive quickly. This may not bother most people who are considering buying one, as it’s perfectly pleasant to drive and the steering feedback is far from terrible – it just lacks the sharpness of a BMW. The Mercedes does compare favourably to competitors such as the Audi A3 Saloon, though, with better body control and positive turn-in that make it feel sharper and sportier than the Audi.

The trade-off for the CLA's decent handling is a firm ride that means it can really thump over cracks or potholes in the road. This is further evidence of how the CLA is aimed at younger buyers, as older Mercedes customers will be used to more refinement and comfort than is offered by the CLA’s suspension. AMG Sport models come with even firmer lowered suspension, so it’s worth remembering that the most comfortable and forgiving setup is the standard one fitted to the entry-level Sport version. 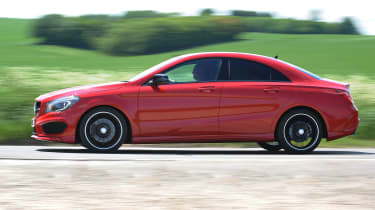 The AMG CLA 45 has been set up for speed, so it gets the Speedshift version of Mercedes’ automatic gearbox, which is more responsive than the standard version. The CLA 45 also features AMG sports suspension, which you can also specify on AMG Sport versions of the less powerful cars in the CLA range. This makes the car even better through corners, but means the ride is even harder. As the driver, this is something you may be able to live with, but your passengers might find the car pretty uncomfortable.

The 4MATIC four-wheel-drive system offered as an option with the CLA 220d and CLA 250 (it’s standard with the AMG CLA 45) means these models have huge amounts of grip, but even this doesn’t make the car quite as engaging as we’d like – particularly when you consider the AMG model has been designed specifically to provide driving thrills. It’s fast and fun, and the obvious choice if you want out-and-out speed, but its price, particularly once you’ve picked a few desirable options, means it starts to compete with proper sports cars like the Porsche 718 Cayman, which is simply a better driver’s car.

The CLA 45 AMG isn't for the faint-hearted: its engine has been tuned to deliver 376bhp and its 0-62mph time of 4.2 seconds is faster than some sports cars that cost twice as much – an Aston Martin V8 Vantage takes longer to do 0-62mph, for example.

We think the CLA 220d diesel is the best all-rounder, offering plenty of power and strong acceleration. The main downside of this engine, however, is that it's quite noisy, while the seven-speed automatic gearbox can be quite frustrating sometimes because of delays between gearchanges.